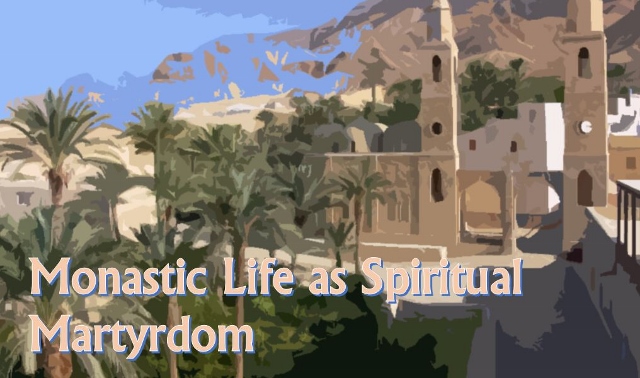 The suffering required for spiritual martyrdom may arise from the voluntary practice of the exercises of ascetical life, and in this form it appears most often in the writings of Athanasius, Pachomius, Macarius, Diodochus of Photice, and the other Greek monastic writers. Such suffering may also be the result of the activities of external agencies as for example, the ill will of evil men, or the envy and hatred of the evil spirits. But even the suffering resulting from natural bodily ill is sufficient for spiritual martyrdom, provided that it is patiently borne, with the proper motives, and in imitation of Christ and the martyrs.

In the course of the present chapter it will be shown that the, voluntary practice of asceticism in the monastic state was looked upon as a spiritual martyrdom from the time of St Athanasius to that of Sulpicius Severus.

St. Pachomius and the Substitute for Martyrdom:

Although St. Pachomius had no opportunity to go in search of real martyrdom as St. Anthony had done, his substitution of the austerities of the ascetical life for the sufferings of martyrdom is no less clear. So too is the fact that he undertook these austerities for the love of God and in imitation of the sufferings of the martyrs. In the Arabic life of the saint it is related that when his severe fasting had begun to impair his health, his disciples prevailed upon him to partake of a larger measure of food. This relaxation did not improve his health, however, and his sufferings continued. Reflecting upon all that the martyrs had suffered for Christ, Pachomius reproached himself for his weakness, and for his inability to suffer such an illness for the love of God. He finally decided to return to his former way of life, and he told his disciples that if some of the martyrs had been made to suffer all sorts of tortures for Christ, Some of them being cut to pieces or decapitated, the monk should be able to bear the slight bodily sufferings that resulted from his ascetic practices. Having reflected seriously on these things himself, Pachomius decided to resume his former austerities and to trust in Christ as the martyrs had done.

That the austerities of the ascetic life supplied for the sufferings of martyrdom was given a sort of divine approval through a vision which Pachomius received shortly before his death. He had been lying ill for a long time, enduring great suffering, and it was thought that he would soon die. One day God gave him a vision in which he saw himself journeying to heaven. As he was on the point of arriving at the gate of life an order came from above that he was to return to the earth. Pachomius was very much grieved about this for he had caught a glimpse of the beauty of the heavenly regions and he was reluctant to leave them. But while he was grieving over this command, a luminous figure appeared to him and consoled him, saying that he must return to earth, for it was necessary for him to endure a “little martyrdom” before the Lord should call him. At these words, the heart of Pachomius was filled with joy and he returned to earth willingly “for he desired greatly to be a martyr to Christ.”

It might be asked, why was the “little martyrdom” assumed to referred to the practices of the ascetical life in the vision. Pachomius himself is our authority for this assumption. Shortly before his death he called his disciple Theodore to him and. recalled for him the details of the vision. He recounted how he was met at the gate of life by a luminous figure who consoled him and told him that he must return to earth, since it was necessary for him to endure a “little martyrdom” before the Lord visited him. Then he told Theodore, “by the grace of God I have accomplished the confession of martyrdom” of which I was told in the vision, for “now I think the days of my death are near.” But no vision or special command of the Lord was necessary to convince Pachomius that a man might become a spiritual martyr through the observance of the practices of the ascetical life. He made it abundantly clear in his instructions to his monks that anyone who wishes may become a spiritual martyr, and that this could be done through observing the rules of the monastic community. He explained this clearly to one of his disciples who had asked him to pray that God might grant him the grace of martyrdom: And there was also there among those who were very famous a certain brother who cultivated the ascetic life by himself, and when he heard of the divine rule of our holy Father Pachomius he entreated him to receive him in the monastery; and when our abba had received him, and he had passed a little time with the brethren, he desired greatly to bear witness (i.e. to become a martyr)… but our abba admonished him that he should not permit this thought to enter his mind again, and said unto him, “Brother, endure the strife of the monks mightily and blamelessly, and make straight your life in the way which will please Christ, and you will have companionship with the martyrs in heaven.”

An Account of a Personal Encounter of an Englishman with Saint...

Featured Article - August 8, 2016
0
There is a man in Egypt whose name is unknown to the ruling class, and who is yet the most talked of and the...