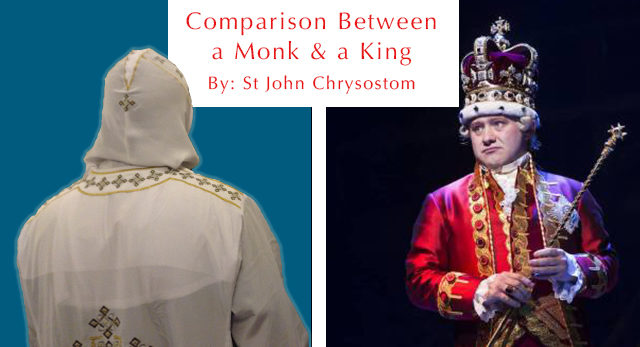 But if we wished also to examine the nighttime, we would see the monk adorned with the worship of God and with prayers, singing much earlier than the birds, living with the angels, conversing with God, enjoying the goods of heaven. But he who commands many nations and peoples and armies, who rules over much land and sea, him you will see stretched out on a couch snoring. For the monk feeds on foods which do not demand a deep sleep, whereas luxurious food puts the king to sleep, and drink keeps him in bed even until day Therefore, the monk has moderate clothing and food, and his table companions are athletes of virtue.

But the king needs to be adorned with gems and gold; he must spread a glorious table and, if he is imprudent, employ companions who are worthy of his own wickedness. But if he is reasonable and temperate, perhaps they will be good and just, but still quite inferior to the virtue of the monks.

Therefore, even if a king philosophizes, he will not be able to approach even slightly the beauty and goodness of the monk. For even when traveling the king is burdensome to his subjects, when he dwells in the city, both in peacetime and wartime, when he exacts tribute and organizes armies and takes conscripts, when he conquers and when he is vanquished.

For when he is vanquished, he fills his subjects with his own misfortunes, but when he conquers he becomes unbearable, adorning himself with trophies, becoming haughty, allowing his soldiers license to plunder, despoil, and injure wayfarers, to besiege idle cities, to ruin the households of the poor, to exact each day from those who have received him what no law allows, on the pretext of some ancient custom, illegal and unjust. And the king does no harm to the wealthy with such evils, but he injures the poor, as if he were actually ashamed before the wealthy. But the monk does not act this way.

As soon as he appears, he wins the favor of rich and poor alike; he approaches them each in the same way, using one cloak the whole year long, drinking water with greater pleasure than others drink marvelous wine, asking of the wealthy no favor for himself, neither great nor small, but for those in need he continually seeks many favors. He is a source of profit, both to those who provide and to those who intend to receive.

Thus he is the common healer of rich and poor alike, freeing the former from sins through a good warning, relieving the latter’s poverty. But now let us examine the benefits, which the monk and the king bestow on their subjects. The one has gold, but the other the grace of the Spirit. The king alleviates poverty, if he is good, but the monk by his prayers will set free souls who are tyrannized by demons. And if it should happen that a person is distressed by such calamities, he bypasses the king as if he were dead and flees to the dwelling of the monks, just as someone escaping a wolf flees to the hunter who carries a sword in his hand.

For prayer is to a monk what a sword is to a hunter. In fact, a sword is not so fearsome to the wolves as the prayers of the just are to the demons. Therefore, not only do we flee to the holy monks in times of need, but even the kings themselves flee to them when they are afraid, like beggars to the houses of the wealthy in times of famine.

H.H. Pope Shenouda III - March 3, 2016
0
There is no doubt that St. Antony gave to God everything he possessed; He did according to the commandment: "He went and sold all...