On the Holy Fathers of Sketis And on Discrimination

‘From what Abba Serapion said, we can learn that we shall be granted the gift of true discrimination when we trust, no longer in the judgments of our own mind, but in the teaching and rule of our fathers. The devil brings the monk to the brink of destruction more effectively through persuading him to disregard the admonitions of the fathers and follow his own judgment and desire, than he does through any other fault. We should learn from examples provided by human arts and sciences. If we cannot accomplish anything in them by ourselves – in spite of the fact that they deal with things we can touch with our hands, see with our eyes and hear with our ears – but still need someone who will instruct us well and guide us, how can it be anything but foolish to think that the spiritual art, the most difficult of all the arts, has no need of a teacher? It is an invisible, hidden art which is understood only through purity of heart, and failure in it brings, not temporary loss, but the soul’s destruction and eternal death.’

Gennanos then said: ‘Certain fathers who have listened to the thoughts of the brethren have often not only failed to heal them, but have even condemned them and driven them to despair. This has provided us with an excuse for shameful and harmful caution: for we ourselves know of cases of this kind in the region of Syria. A certain brother revealed his private thoughts to one of the elders living in those parts, unashamedly laying bare the hidden things of his heart with complete simplicity and truth. When the elder heard these things, however, he at once began to be angry with the brother and to attack him, rebuking him for having such base thoughts. As a result, many who heard of this were ashamed to tell their thoughts to the elders.’

Abba Moses said: ‘It is a good thing, as I said, not to hide your thoughts from the fathers. But you should not tell them to just anyone, you should confess them to spiritual masters who have discrimination, not simply to those whose hair has grown white with age. Many who have looked to age as a guide, and then revealed their thoughts, have not only remained unhealed but have been driven to despair because of the inexperience of those to whom they confessed. There was once a very zealous brother who was greatly troubled by the demon of unchastity’. He went to a certain father and confessed his private thoughts to him; but this father, being inexperienced, became angry when he heard about them and told the brother that he was contemptible and unworthy of the monastic habit for having entertained thoughts such as these. When the brother heard this, he lost heart, left his cell and set off back to the world. Through God’s providence, however, Abba Apollos, one of the most experienced of the elders, chanced to meet him and, seeing him over-wrought and very despondent, asked him why he was in this state. At first, the brother did not reply because he was so depressed. But, after the elder had pleaded with him, he told him what was wrong, saying: “Because I was often troubled by evil thoughts, I went to tell them to the elder: and as he said I have no hope of salvation, I have given up and am now on my way back to the world.”

‘When Abba Apollos heard this, he comforted and encouraged him, saying: “Do not be surprised, my child, and do not lose hope. I too, old and grey as I am, am still much troubled by these thoughts. Do not be discouraged by this burning desire, which is healed not so much by human effort as by God’s compassion. Please do this for me: go back to your cell just for today.” This the brother did; and Apollos, after leaving him, went to the cell of the elder who had caused his despair. Standing outside he implored God with tears and said: “0 Lord, who puts us to the test for our own benefit, let this elder be given the brother’s battle, so that in old age he may learn through experience what he has not been taught over these many years: how to feel sympathy with those who are under attack by the demons. “As he finished his prayer, he saw a dark figure standing near the cell shooting arrows at the elder. Wounded by the arrows. The elder at once began to stumble back and forth as though drunk. Unable to withstand the attack, he finally left his cell and set off for the world by the same road that the young monk had taken. ‘Seeing what had happened, Abba Apollos confronted him, and asked him where he was going and why he was so troubled. Although he realized that the holy man knew what was wrong with him, he was too ashamed to say anything. Abba Apollos then said to him: “Return to your cell, and in the future recognize your own weakness. 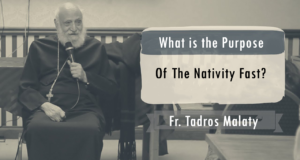 Fr. Tadros Yacoub Malaty - December 27, 2018
0
Why is the Coptic Church concerned with the Nativity Fast, in which her members fast for more than forty days? Undoubtedly, the Incarnation of...