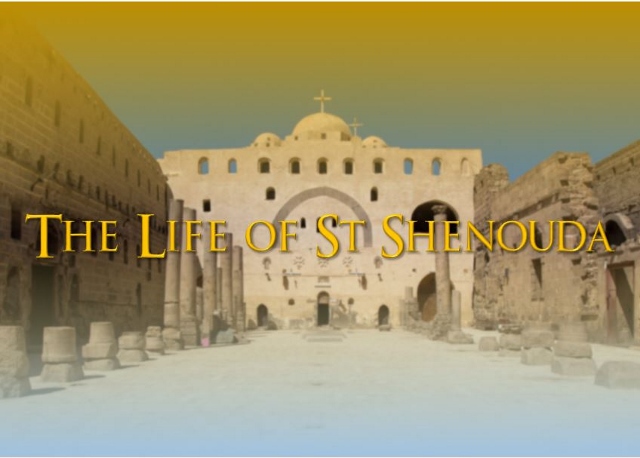 St Shenouda was born on the 7th of Pashans 49AM / 2nd of May 333 AD, in Shandawil, a village near Akhmim in Upper Egypt. At the age of nine years old, St Shenouda’s righteous parents Darouba and Agbous asked shepherds to teach him how to care for the sheep, and to send him back before nightfall. Even at his young age, the boy would give his food to the other shepherds and spend the day in prayer and fasting.

His father Agbous then discovered that each day St Shenouda would leave early with the shepherds and return late in the evening. So one day, his father followed him to find out where he goes each day and to his surprise he found his son standing beside a well and spending many hours in prayer.

On the following day St Shenouda’s father took him to his uncle Pigol, who was abbot and founder of the famous ‘Red Monastery’ of Atribe. St Shenouda’s father asked the abbot to bless the boy, but Abbot Pigol took the young boy’s hand, put it on his head, and said, “I am in need of this boy’s blessings, for he is a chosen vessel of Christ, and will serve Him faithfully all the days of his life.” The remarkable spiritual progress of this boy attracted both the abbot and monks of the Monastery. On one occasion one of the elders saw his fingers alight like candles when he stretched out his hands in prayer.

In 383 AD, St Shenouda succeeded his uncle Pigol as abbot of the White Monastery, setting out a strict order of Monasticism and transformed Pigols foundation into one of the largest and most influential Monasteries in Egypt. St Shenouda was abbot for more than 65 years and was the spiritual father and leader of more than 2,200 monks and 1,800 nuns and were not isolated from the Egyptian community. He also opened his Monastery to the people on Saturdays and Sundays, during which he explained to them the Holy Scriptures, giving special interest to uprooting heathen and pagan customs. His courage and wisdom also helped him in overcoming the pagans of Akhmim.

St Shenouda had strict ascetic practices, due to his devoutness, St Shenouda underwent many demonic temptations, but through his faith and righteousness, he was victorious. On one occasion, a devil appeared to him in the form of an angel, saying, “Hail, Oh struggling saint! The Lord has sent me to you, for you are righteous and have struggled much. You have experienced enough toil and ascetic practices in this wilderness now you must go into the world to guide people there.” St Shenouda modestly replied, “If you have been sent from God, stretch out your hands in the sign of the holy Cross of our Lord and Saviour.” On hearing these words the devil fled, as he could not bear hearing the name of the Lord Jesus and His holy Cross.

The Monastery of St Shenouda is known as the ‘White Monastery’ to this day because of the whiteness of its appearance. St Shenouda died in 465 AD at the age of 117, St Wesa his disciple tells us he bears the title ‘Archimandrite’, meaning ‘head of the solitaries or hermits’.

May His blessings be with all Amen.

The Ninevites and US

A Testimony by Dr Otto Meinardus

Featured Article - February 17, 2016
0
Today, 4.5 km west of Dair el-Baramous is one of the few inhabited caves in the ancient Desert of Scetis. Abuna Abd el-Mesih elHabashi...