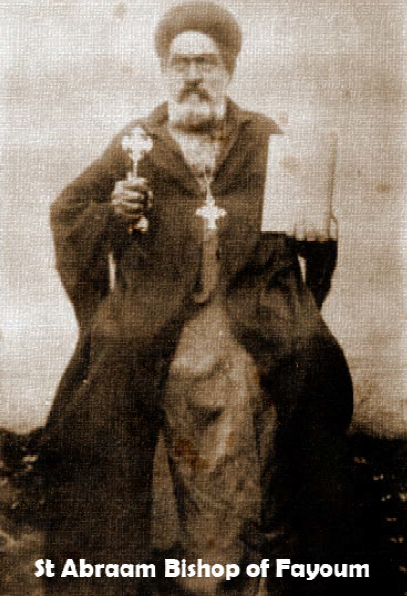 There is a man in Egypt whose name is unknown to the ruling class, and who is yet the most talked of and the most deeply venerated man in all the valley of the Nile. Although he is a Christian bishop he is just as much a saint of heaven to the Moslem as to the Christian; and the Christians who join in the daily crowd that seek his spiritual help and blessing number Copts and Greeks and Romans— the latter being by no means confined even to natives of Egypt.

Before I even thought of seeking an audience of this wonderful old man I had heard Catholic people as far away as France speaking of the Bishop of the Fayoum and Gizeh in Egypt as an ascetic in whose powers were confirmed all the signs which our Lord had said should follow them that believe— “In My name they shall cast out devils… they shall lay hands on the sick and they shall recover.”

No matter where I had gone in Egypt, I had heard again and again of the Bishop of the Fayoum; and incredible stories were told to me of his self-denials, his fastings, his mystical wisdom, his power of divination, his faculty to exorcise evil spirits and to cure all manner of sickness; and of the comfort his words gave to the afflicted both in soul and in body; of his unstinted kindness to the poor, whom he helped out of a coffer which was like unto the widow’s cruse; and how, with flashes of insight, he reproved the evil-doers who thought to deceive him, the spiritual force that was in him seeming to overtake such even when they had left his presence.

Many stories are told of his detachment from every sort of mundane claim, and of his contempt of the needs of the body which was like that of the saints of old. As he has now reached nearly a century of years, the veneration always felt for him has gained in depth as he has survived one generation after another of those who have felt his influence.

It was one thing, however, to resolve to seek an audience of the saint, and another to wear one’s way patiently through all the hindrances conjured up by the suspicions of the Oriental Christians, who alone could help me; who, while they were charmingly courteous, and to all seeming more than willing to do what I asked, were all the time questioning themselves in their own minds if it was to the advantage of the Copts that an Englishman should go behind the Oriental veil which hides a life that they fear may not be really understood or approved of in the light of a standard differing from their own.

It is, as we know, a matter of self-conscious pride to the Copt that he is a fellow Christian with the Englishman; but he is not content with that: he wants the Western visitor to see only those phases of his Christianity which approximate to that of England. And so with the refined skill of the East he will, in most cases, lead the inquirer aside from everything that the Oriental in him has made indubitable, but which is, if he could only realise it, the chief interest of the Western inquirer, as well as being the last thing ever to be suppressed or eliminated.

Now the word is given, and we are ushered into a bare chamber, but for a square bed, and two chairs obviously imported for the occasion. On the bed, sitting in the Eastern posture, and wrapped in a threadbare robe of black, with a black plaited turban on his head, sat the frail, emaciated form of the Bishop.

Introductions were made, the old man being particular to know correctly the names of those who were strange to him. He took the hand of each visitor in turn, but kept his own hands all the time partly concealed in the wide sleeve of his robe. The instinct of every Oriental is to kiss the hand of any man for whom he has deep veneration, but Bishop Abraam, I found, will never allow his hand to be kissed, if by covering it in this way he can avoid it.

It was with deep emotion that I looked into the face of this modern saint. To doubt his right to the title was impossible, for the power of a pure and beautiful soul made itself felt at once, with a force that was almost overwhelming.

The eyes looked out of a calm, grave face, fringed with a small white beard, which in no way obscured the sensitive mouth. The turban was worn farther back than is usual, leaving the broad unwrinkled forehead to suggest that the ascetic, in this case, had been governed by a fine intelligence.

That the Bishop was a centenarian seemed difficult of belief; he might be as weak as the frailness of his body suggested, but nothing about him even hinted that the mind was touched with age; and when one caught the steady glance of his eye, and heard him speak, the physical limitations were forgotten, which perforce made of his bed the throne from which he ruled his diocese and ministered to the larger world of suffering humanity.

The two chairs were placed close to the bed, so that my wife and I might sit near to the Bishop. He then questioned me earnestly about the Church in England, and the Bishop of London, who was visiting Egypt at that time, for he had heard of him, and that I was acquainted with him, and that we had met in Khartoum. Then he turned to more personal matters, and was concerned for our general well-being.

To my request that the Bishop would give us his blessing, he asked, in a very quiet voice, one of the priests who were present to bring to him his hand-cross. I had often heard of this particular cross, which had been held in blessing over tens of thousands of Egyptians, and was believed by most of them to have in itself mystical powers. It is the cross the Bishop has used all his clerical life, and I know that he himself is so attached to it that he considers his powers would be disturbed by its injury or loss.

It is usual, I believe, in every Christian Church to kneel in receiving a bishop’s blessing; but on no account would Amba Abraam consent to any person kneeling before him to God, he said, alone was such respect is due. He was distressed that I felt obliged to kneel, but when I explained that my first reverence was to God, and then to His good servant, he gently gave way.

Taking the cross in his right hand, and holding it closely over our heads, the Bishop poured out, mostly in the Coptic language, in tones of rapt devotion, the wonderful prayers and blessings of his Church. Of the mere words, I of course recognised little, except the oft-repeated “Kyrie Eleison!” (Lord have mercy!). But I was thrilled nevertheless by the childlike earnestness of the man who uttered them; never had I heard prayer which seemed to establish a link with the Throne of Grace with such instant security; it seemed as if earth fell away, to leave this man speaking in the clear presence of God Himself.

The blessing over, the gentle old man again inquired, in tones of tender solicitude, as to the welfare of all, myself and family. In Oriental terms he spoke of the pleasure such a visit had given him.

Turning to a priest, the Bishop asked him to bring to him certain little gifts, consisting of as many coloured manâdîl (handkerchief) as there were members of our party. Taking these separately in his left hand, he held his little cross over them and blessed them, in the name of each of us in turn, handing them to us as a souvenir of the visit.

It is usual in the East, as I have already noted, always to make presents to visitors; this trifling gift was at the same time a sign of politeness and a symbol of the poverty in which the Bishop lived; it is the form the Bishop’s presents always take, and because of the personal blessing going with it, the little red handkerchief, distributed all over Egypt, is treasured in thousands of homes, doubtless as a sort of holy talisman. We now saluted the Bishop and withdrew.

5 Things you need to know about Psalm 119

Featured Article - February 26, 2016
0
Most of the Apophthegmata Patrum are in the form of question and answer, a clear indication of their didactic purpose: a junior “brother" approaches...