“I have no taste for corruptible food nor for the pleasures of this life. I desire the bread of God, which is the flesh of Jesus Christ, who was of the seed of David; and for drink I desire his blood, which is love incorruptible” (Letter to the Romans 7:3 [A.D. 110]).

“Take note of those who hold heterodox opinions on the grace of Jesus Christ which has come to us, and see how contrary their opinions are to the mind of God…They abstain from the Eucharist and from prayer because they do not confess that the Eucharist is the flesh of our Savior Jesus Christ, flesh which suffered for our sins and which that Father, in his goodness, raised up again. They who deny the gift of God are perishing in their disputes” (Letter to the Smyrnaeans 6:2–7:1 [A.D. 110]).

“We call this food Eucharist, and no one else is permitted to partake of it, except one who believes our teaching to be true and who has been washed in the washing which is for the remission of sins and for regeneration [i.e., has received baptism] and is thereby living as Christ enjoined. For not as common bread nor common drink do we receive these; but since Jesus Christ our Savior was made incarnate by the word of God and had both flesh and blood for our salvation, so too, as we have been taught, the food which has been made into the Eucharist by the Eucharistic prayer set down by him, and by the change of which our blood and flesh is nurtured, is both the flesh and the blood of that incarnated Jesus” (First Apology 66 [A.D. 151]).

“If the Lord were from other than the Father, how could he rightly take bread, which is of the same creation as our own, and confess it to be his body and affirm that the mixture in the cup is his blood?” (Against Heresies 4:33–32 [A.D. 189]).

“He has declared the cup, a part of creation, to be his own blood, from which he causes our blood to flow; and the bread, a part of creation, he has established as his own body, from which he gives increase unto our bodies. When, therefore, the mixed cup [wine and water] and the baked bread receives the Word of God and becomes the Eucharist, the body of Christ, and from these the substance of our flesh is increased and supported, how can they say that the flesh is not capable of receiving the gift of God, which is eternal life—flesh which is nourished by the body and blood of the Lord, and is in fact a member of him?” (ibid., 5:2).

“’Eat my flesh,’ [Jesus] says, ‘and drink my blood.’ The Lord supplies us with these intimate nutrients, he delivers over his flesh and pours out his blood, and nothing is lacking for the growth of his children” (The Instructor of Children 1:6:43:3 [A.D. 191]).

“He [Paul] threatens, moreover, the stubborn and forward, and denounces them, saying, ‘Whosoever eats the bread or drinks the cup of the Lord unworthily, is guilty of the body and blood of the Lord’ [1 Cor. 11:27]. All these warnings being scorned and contemned—[lapsed Christians will often take Communion] before their sin is expiated, before confession has been made of their crime, before their conscience has been purged by sacrifice and by the hand of the priest, before the offense of an angry and threatening Lord has been appeased, [and so] violence is done to his body and blood; and they sin now against their Lord more with their hand and mouth than when they denied their Lord” (The Lapsed 15–16 [A.D. 251]).

“After having spoken thus [at the Last Supper], the Lord rose up from the place where he had made the Passover and had given his body as food and his blood as drink, and he went with his disciples to the place where he was to be arrested. But he ate of his own body and drank of his own blood, while he was pondering on the dead. With his own hands the Lord presented his own body to be eaten, and before he was crucified he gave his blood as drink” (Treatises 12:6 [A.D. 340]).

“The bread and the wine of the Eucharist before the holy invocation of the adorable Trinity were simple bread and wine, but the invocation having been made, the bread becomes the body of Christ and the wine the blood of Christ” (Catechetical Lectures 19:7 [A.D. 350]).

“Do not, therefore, regard the bread and wine as simply that; for they are, according to the Master’s declaration, the body and blood of Christ. Even though the senses suggest to you the other, let faith make you firm. Do not judge in this matter by taste, but be fully assured by the faith, not doubting that you have been deemed worthy of the body and blood of Christ…[Since you are] fully convinced that the apparent bread is not bread, even though it is sensible to the taste, but the body of Christ, and that the apparent wine is not wine, even though the taste would have it so,…partake of that bread as something spiritual, and put a cheerful face on your soul” (ibid., 22:6, 9).

“Perhaps you may be saying, ‘I see something else; how can you assure me that I am receiving the body of Christ?’ It but remains for us to prove it. And how many are the examples we might use!…Christ is in that sacrament, because it is the body of Christ” (The Mysteries 9:50, 58 [A.D. 390]).

“What you see is the bread and the chalice; that is what your own eyes report to you. But what your faith obliges you to accept is that the bread is the body of Christ and the chalice is the blood of Christ. This has been said very briefly, which may perhaps be sufficient for faith; yet faith does not desire instruction” (ibid., 272).

“We will necessarily add this also. Proclaiming the death, according to the flesh, of the only-begotten Son of God, that is Jesus Christ, confessing his resurrection from the dead, and his ascension into heaven, we offer the unbloody sacrifice in the churches, and so go on to the mystical thanksgivings, and are sanctified, having received his holy flesh and the precious blood of Christ the Savior of us all. And not as common flesh do we receive it; God forbid: nor as of a man sanctified and associated with the Word according to the unity of worth, or as having a divine indwelling, but as truly the life-giving and very flesh of the Word himself. For he is the life according to his nature as God, and when he became united to his flesh, he made it also to be life-giving” (Session 1, Letter of Cyril to Nestorius [A.D. 431]). 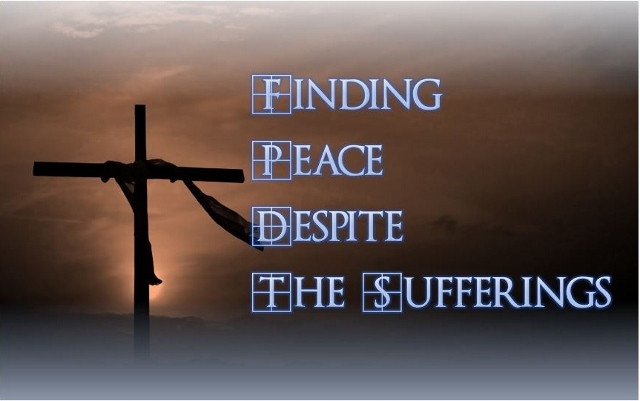 Featured Article - January 10, 2017
0
As we endure these difficult times and suffering, we experience a range of emotions, including despair, anger, and restlessness. The Lord has blessed us...