On both sides, beloved, reap the utmost gain, and avoid the imitation of Adam knowing how many ills are begotten of laziness and imitate the piety of Job, learning how many glorious things spring from earnestness. Consider him, the conqueror throughout, and you shall have much consolation in all pain and peril. For as it were in the common theatre of the world that blessed and noble man stands forth, and by means of the sufferings which happened to him, discourses to all to bear all things which befall them nobly and never give in to the troubles which some upon them. For verily, there is no human suffering which cannot receive consolation as a result. For the sufferings which are scattered over the whole world, these came together, and bore down upon one body, that of Job.

What pardon then shall there be for him who is unable to bear with thankfulness his share of the troubles which are brought upon him? Since he appears not bearing a part only, but the entire ills of all men, and in order that you may not condemn the extravagance of my words, come, and let us take in hand severally the ills that came upon him, and bring forward this fulfillment of them.

And if you wish, let us first bring forward that which seems to be the most unendurable of all, I mean poverty, and the pain which arises from it.

For everywhere all men bewail this. Who was poorer, then, than Job, who was poorer than the outcasts at the baths and those who sleep in the ashes of the furnace, poorer in fad than all men? For these, indeed, have one ragged garment, but he sat naked, and had only the garment which nature supplies, the clothing of the flesh, and this the Devil destroyed on all sides with a distressing kind of decay. Again, these poor folk are at least under the roof of the porches at the baths and are covered with a shelter, but he continued always to pass his nights in the open air, not having even the consolation of a bare roof. And what is still greater, the fad that these are conscious of many terrible evils within themselves, but he was conscious of nothing against himself.

For this is to be noticed in each of the things which happened to him, a thing which caused him greater pain, and produced more perplexity; the ignorance of the reason of what took place. These persons, then, as I said, would have many things with which to reproach themselves. And this contributes much to consolation in calamity; to be conscious in oneself of being punished justly. But he was deprived of this consolation, and while exhibiting a conversation full of virtue, endured the fate of those who had dared to do extreme wickedness. And these folk who are with us, are poor from the outset, and from the beginning are experienced in calamity.

But he endured calamity in which he was unexperienced, undergoing the immense change from wealth. As then the knowledge of the cause of what takes place, is the greatest consolation; so it is not less than this, to have been experienced in poverty from the beginning and so to continue in it. Of both these consolations that man was deprived, and not even then, did he fall away. Do you see him indeed come to extreme poverty, even in comparison with which it is impossible to find a fellow? For what could be poorer than the naked who has not even a roof over him? Yes rather not even was it in his power to enjoy the bare ground, but he sat upon the dunghill. Therefore whenever you see yourself come to poverty, consider the suffering of the just one, and straightway you shall rise up, and shake off every thought of despondency. This one calamity therefore seems to men to be the groundwork of all sufferings together. 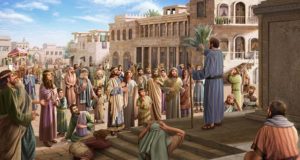 The Ninevites and US

Fr. Matthew the Poor - February 20, 2020
0
The Ninevites and Us We may be shocked when we look at what happened in Nineveh. As soon as the king knew what had happened...