The Biography of St Anthony “Vita Antoni” written by St Athanasius in the 4th century was and still is a source of inspiration to many. St Augustine writes in his confessions. After he read the biography of St Anthony that he “neither wished nor needed to read further. At once with the last words of this sentence, it was as if a light of relief from all anxiety flooded into my heart.”

It was also the reason monasticism introduced to the western world. But someone might think, but how is it relevant for us today. St Anthony went to the desert and we cannot all do the same. But when we consider why did St Anthony chose the desert to fulfill the gospel calling to follow Christ.

The desert was usually known to be a dwelling place for demons. In the life of St Macarius, the saint overheard the devils prophesying “if we allow him to remain here, multitudes will gathers around him and the desert places will not be under our power.” If St Anthony in the 4th century had to go out to the desert to combat the demons, we today do not have to go very far at all to do that. Turn on your T.V. or Internet, or just drive in the city streets. So to read the life of St Anthony is like reading “how to defeat the devil manual in the 21st century Australia.”

So the first step in our spiritual warfare is to declare war against the demons. We sometimes blame all our sins and every evil that happens to us on the devil, when it is really us who put ourselves in such situations. In the Sayings of the Desert Fathers there is a story of a monk who complained to his father that the devils were waging a strong war against him. After the father prayed, the devils told him we did not even know that this monk came to the desert.

St Anthony declared war against the devil by reading the gospel and applying it in his life. He put in his heart to ‘resist the devil and it will flee from you.’ He refused the distorted image society gives to religious people. He gave the bible commandment first priority in his life even if it cost him all his possessions.

Secondly we need to be persistent. Our spiritual warfare lasts a lifetime. We read in the vita that the devils ceaselessly fought against St Anthony all his life, and he does the same today but it is us who have to fight back at all time without putting our guards down. When the devil could not attack St Anthony by thoughts, he physically abused him to the extent that some villagers had to take him back to the village, and after he regained his consciousness he sat up and asked them to take him back to the Arena of Combat. In the Coptic tradition there is a story about St Anthony that while he is praying the devil came to him and physically abused him and while pulling his head garment (Kolonsua) he torned it into two, so the saint got up sawed his head garment back and kept praying (Which is the reason why monks today wear a head garment with sawing in the middle, to remember St Anthony’s persistence in struggle).

The attacks that were waged on St Anthony are not any different than ours today. It says in vita that the devil “first tempted to lead him away from his ascetical disciplines, casting into him the remembrance of his possessions and his guardianship of his sister, longing for family and kin, love of money, boasting, the pleasure in eating many kinds of foods and the other satisfactions of life. Finally he cast into his heart the difficulty of virtuous living.”

It is very interesting to read that St Anthony like all of us went through many spiritual warfares. What is interesting about his, is that we often have superman image of the saints, as if their life was only about performing miracles and seeing visions and so on but we often overlook the part of the story where they were like us, weak, struggle against sins, and falls and gets up again. If we understand this, it makes the saint’s life more relevant to us today.

Why do Demons Fight Monks?

Monks and the Fear of God 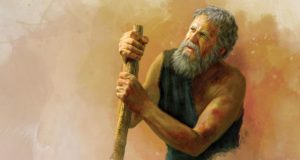 St. John Chrysostom - March 17, 2020
0
Suffering Job On both sides, beloved, reap the utmost gain, and avoid the imitation of Adam knowing how many ills are begotten of...