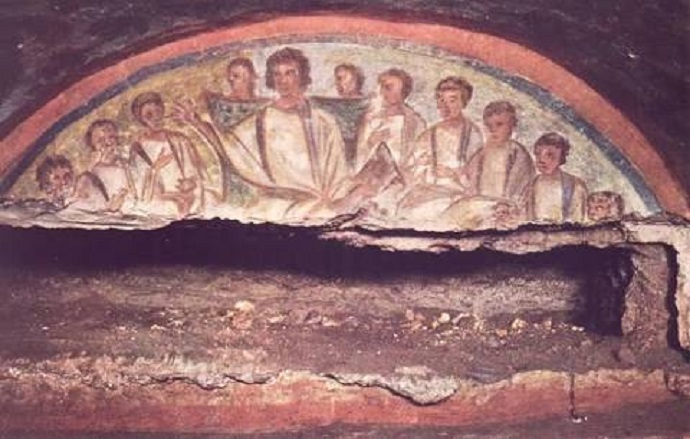 It happened one time that our father abba Shenouda was in the cell in the desert, and he delayed his return to the monastery because he was praying in those days for the river to flood. He gave us a command, saying: ‘Let none come into the desert’. So when something was needed for the monastery, we were afraid to send to him. Now there was a second in command set under our father, and the second called abba Joseph, our father’s secretary, and said to him: ‘Go up and tell our father of the matter and ask him what we should do’. He obeyed him and went up to our father to the cell in the desert. When he drew near the cell, it sounded to him as if our father was speaking to some people, and he was afraid to approach him. After a short time, our father called out and said: ‘Come in, Joseph! Do not stay outside’. So he went in and received his blessing. My father said to him: ‘Why did you come into the desert and not open the door of the cell and come in?’ He replied humbly: ‘I thought that the rulers of the city had come up here to you and were talking with you. That was why I did not come in, my father’. Our father abba Shenouda replied to him and said: “Joseph, Shenouda does not speak with men in the desert; it is the angels I speak with, or the prophets, or apostles, or martyrs. Nevertheless, Joseph, you lost a great blessing today, for the twelve apostles had come to visit me here and they just now

THE WISDOM OF THE PRAYERS OF THE HOURS

Featured Article - December 7, 2016
0
The act of writing held an almost sacred place in early Christianity. In putting word to parchment or papyrus, the Christian author ritually and...