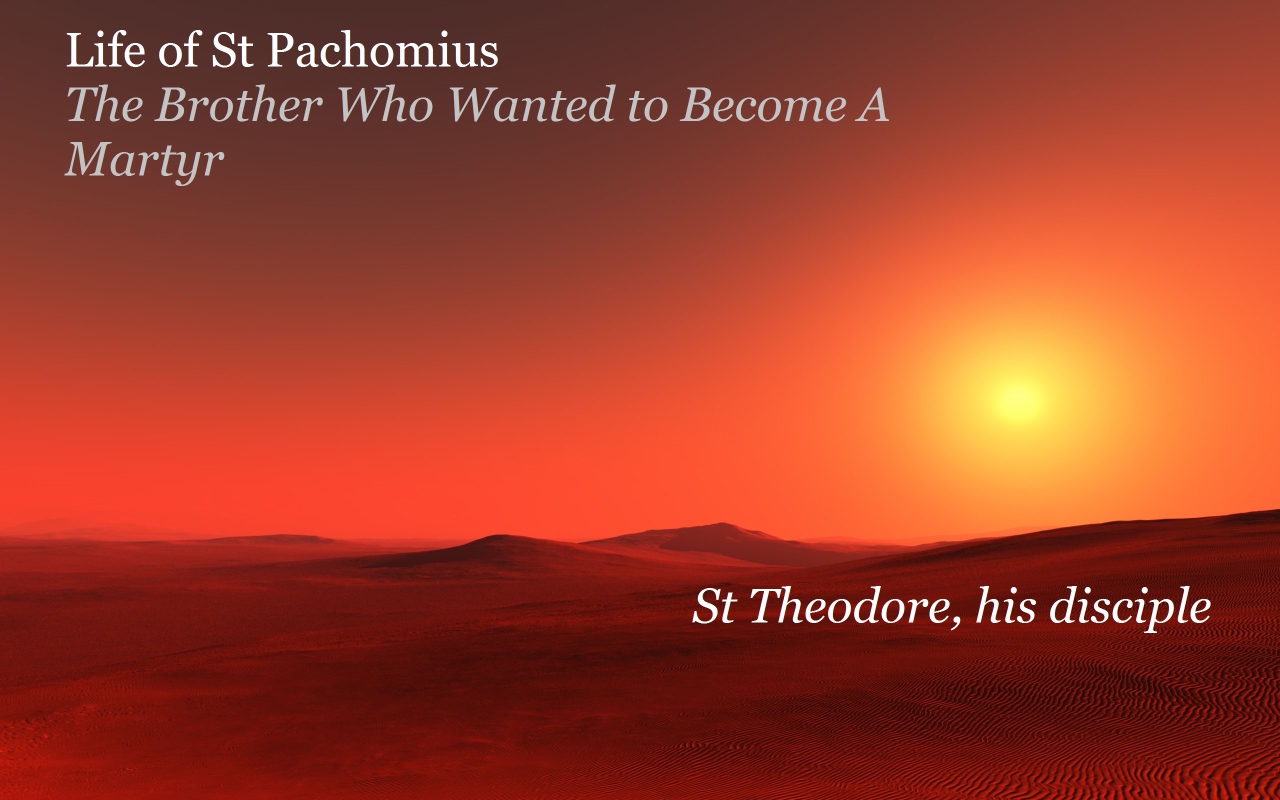 There was one of the very outstanding brothers, who was practising ascetism by himself. He heard of the godly life of the great St Pachomius and begged him to receive him into the monastic Community. The Great Man received him; and after he had spent a short time with the brothers, he greatly desired to become a martyr, at a time when the world was at peace and the Church was flourishing and also at peace; by the grace of God the blessed and Christ-bearing Constantine was reigning at that time. That brother continually entreated the Blessed Man saying, “Pray for me, Abba, that I may become a martyr.” The Great Man admonished him saying, “Do not allow this thought to enter your heart again.” And he would say to him, “Brother, endure the monk’s contest nobly and blamelessly, directing your life according to what is pleasing to the Lord, and you will have the fellowship with the martyrs in heaven.”

As he desired this thing more and more every day, and as he was pestering the Holy Man to pray for him, the Great Man, shaking off his importunity, told him, “Be it so. I will pray; but if you want it, you shall have it. Be on your guard lest, when the hour comes, instead of becoming a martyr you shall be found denying Christ. Truly you commit an offence in desiring to put yourself into temptation when our Lord Jesus Christ commands us to pray not to fall into temptation.” And having said these things to him, he admonished him to take good heed of himself and not to think of this any more.

It happened two years later that some of the brothers were sent by the Great Man to a village upstream to collect straws to make mats for the Monastery. Now, the village was near the barbarians who are called Blemmyes. And while the brothers were there, on an island where there were many rushes, the Blessed Man sent to them the brother who desired to become a martyr, to carry some small things to them. He admonished him to take good heed of himself, quoting enigmatically these words of the Scripture, “Behold, now is the favorable time; this is the day of salvation;’ giving no offence in anything, so as not to bring discredit on our ministry.” So, he took the donkey loaded with the things and went to the brothers.

When he had come near the desert, the barbarians, coming down to draw water, came upon him. They took him down from the donkey and bound his hands. Then, taking the donkey with the baggage, they led him up to the mountain to the other barbarians. The barbarians seeing him coming with the donkey began to mock him saying, “Monk, come and worship our gods.” They slew some animals and offered them to their idols. Then they brought the monk and urged him to offer with them. As he did not want to do it, they approached him with anger, holding their naked swords and threatening to kill him at once if he refused to sacrifice to their gods and to pour out libations to them. Seeing their naked swords and frightened at their savagery, he took the wine at once and poured it in libation to their idols and ate with them of the meat sacrificed to the idols. Fearing the death of the body, he slew his immortal soul, denying God, the master of all. Then, when he had done this, the Blemmyes let him go.

When he had come down from the mountain and come to himself, he knew his iniquity, or rather the impiety which he had done. He rent his garments, struck his face repeatedly and came to his monastery. The Blessed Man, knowing what had happened to him, came out to meet him with great affliction. When the brother saw him coming to him, he threw himself on his face on the ground, weeping and crying, “Father, I have sinned against God and against you, because I did not listen to your good advice or to your admonition. For had I listened to you, I would not have experienced this.” Hearing this, the Great Man told him, “Rise up, wretched man. You have shut yourself out from such goods, O miserable one. Truly a crown was laid up for you, and you have cast it from you. You were ready to be numbered among the holy martyrs and you have banished yourself from their holy fellowship. Christ, the Master, was there with His Holy Angels, willing to set His crown upon your head, and you have denied him for the sake of an hour. Through fear of the death which you are going to endure in any case though unwillingly you have fallen away from God and lost eternal life. Where are the words you used to say before this? Where is your craving?” Then he said, “I have sinned in all things, O Father. I cannot lift up my face to heaven. I am lost, O Father. I did not expect it would happen this way.”

As he said this with tears, the Great Man said to him: “O wretched man, you have estranged yourself completely from the Lord. But the Lord is good and he never kept His anger for a testimony, for He delights in merry and He is able to sink our sins in the depths of the sea, for as heavens are far from the earth, so far away does He set our sins from us. For He desires not the death of the sinner but His repentance, and that the man who has fallen should not remain in his fallen condition, but should rise up, and that he who has turned away should not go far off, but return quickly to Him. Therefore, despair not of yourself; there is hope of salvation. For, as it is said, if every tree is cut down, it will sprout again. Then, if you will even now listen to me in every-thing I say to you, you shall have forgiveness from God.” He answered with tears, “In all things I will listen to you from now on, O father.

The Great Man ordered him to withdraw to a quiet place, to shut himself off and to hold converse with no one until his death; to eat every other day, salt and bread, and to drink only water for the rest of his life; to make two mats every day, and to keep vigil as much as possible; to pray as much as he could and not to cease at all from weeping. He withdrew, as the Blessed Man had commanded him, and he doubled all he had told him to do. He held converse with no man except the Great Man and Theodore and a few of the other great old men. After he had spent ten years struggling in this manner, he died, having, by the Lord’s grace, borne a good witness.

From: Life of St Pachomius
By: St Theodore his Disciple

One of the Youth - January 5, 2017
0
Many of us would dream of seeing and speaking with Christ in person. Indeed those people such as the apostles, who lived during His...