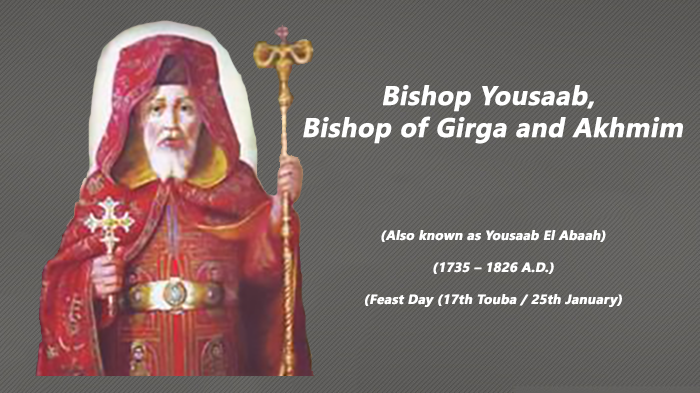 Youssef, (Bishop Yousaab) was born in 1735 A.D. in the town of Assiut from a pious Christian family. He used his knowledge of reading and writing to educate himself from the church books. In addition to his love for reading Christian books, he loved reading the lives of saints and emulating their virtues ascetical life. One day after reading the life of St Anthony he was inspired by his way of life and decided to go to his monastery to become a monk. In St Anthony’s monastery he continued his reading historic and theological books that were in the monastery library.

During the papacy of Pope Youanis 18th (John 18th) (1769-1796 A.D), the 107 patriarch of Alexandria, the church went through many difficulties. Many of the Muslim rulers imposed ridiculously heavy taxes on the Christians and on the patriarchs. Christian homes were often raided by Muslim mobs for fictitious reasons that were made up by the leaders whose sole intention was to ride the country of Christians or a way of collecting revenue for the government to use in their wars.

During the French invasion to Egypt (1798 -1801 A.D.) many Catholic missionaries came with the intention of converting the Copts to the Roman Catholic faith. One of the Coptic bishops at the time, bishop Antonious (Anthony) of the province of Gerga decided to convert to the Catholic faith, which caused much strive and unrest within the church as many of the simple minded people started to question their Orthodox faith. Therefore Pope Youanis 18th called for the monk Youssef Al-Antouny from his monastery to help him in the secretarial work in the patriarchate.

Because of the Pope’s knowledge of the Fr Youssef’s virtuous life and his knowledge of the Orthodox faith he ordained him as a bishop over two Diocese, namely Diocese of Gerga and Akhmim, by the name of Yousaab, in the year 1791 to rectify the damage done in these cities by the apostate bishop. After his ordination Bishop Yousaab did not cease from teaching the people of the city about the orthodox faith and answer the wrong teachings of the many Jesuits who were preaching their Catholic teachings to the simple congregation of the city. He also wrote many books that helped educated people to answer the attacking questions of these missionaries.

He also left the church a valuable library of articles that are kept unpublished in the Paris National Library, the Patriarchate Library and the Library of St Anthony’s monastery in the Red Sea. These writings consist of over 30 treaties which are usually collected in the same manuscript under the title Silah al mu’minin (the weapon of the faithful) or sometimes under the title Kitab al-Maqalat (the book of treaties) and it usually covers various topics ranging from theological, pastoral, bible commentaries, funerary orations, and sermons for the feasts of the church. I have included the list of these treaties below.

There is no certainty about the naming of the saint by the name Abaah which means (Husky). Some think it is his family name, yet there is no family in his place of birth by this name. The other suggestion is that it is because of his many sermons he lost his voice and therefore he was given that name.

Bishop Yousaab kept his rigor for teaching mixed with his love for the monastic life until his death at a peaceful old age of 91. His life is commemorated in the Coptic Synaxarium, which is read on the 17th of the Coptic month of Tobah. Some of his belongings still survive until today, His bishopric vestment and cross which are currently at St Anthony’s Monastery; his bishop’s throne which is currently at the monastery of Akmim where he resided as a bishop. Yet the most valuable remain that we have of the saint is his uncorrupt body which remained uncorrupt for about 185 years. His body is at St Anthony Monastery in Egypt where they celebrate his feast day yearly and anoint his body with sweet herbs. I was fortunate enough to be at the monastery on his feast day and have included a video of a part of the celebration when his unbody is returned by Bishop Youstos Bishop of St Anthony’s Monastery to its shrine after the procession.

After the saint’s death God wanted him to be known to us, so he preformed many miracles to Copts and none Copts. The Icon we have of the saint today is not an old icon that was drawn by someone who knew him but it is from the many apparitions he had to people whom he preformed miracles to and they were able to describe his distinct features. The vestment and cross he is wearing in the icon above is a drawing of the actual vestment and cross we have for him in St Anthony’s Monastery. 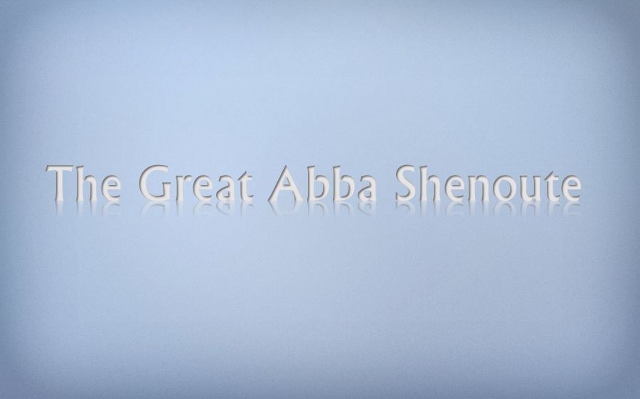 Featured Article - January 10, 2017
0
“There is a man in the south of Egypt called Shenoute. Whatever he says truly comes to pass.” - St Wissa When contemplating on the lives...