One day, a man from the town of Ashmin came to him. He was a notable businessman of very great wealth, and thieves had robbed his house, leaving him nothing. He came to my father and cried: “Help me, my lord and father! They have devastated my house and left me nothing at all”. My father Abba Shenoute replied: “Arise and go north to the town of Sioout; you will find three men sitting on the ground outside the door of the city gate, one of them will be combing his hair. Say to him: ‘Shenoute says: Come to me so that I may speak with you about a certain matter,’ and the man will talk with you.” So after he had received his blessing, the businessman departed and went north to the town of Sioout, and he found the three men sitting on the ground outside the city gate, just as my father had told him, and one of them was combing his hair. To him the business-man said: “Friend, the man of God Abba Shenoute says: Come to me so that I may speak with you and tell you of this matter”. The man said to him: “Indeed! Behold, for many days I have wanted to see that holy man to receive a bless-ing from him.” There and then the two of them arose and set off together, and came to the holy Abba Shenoute and received his blessing. He said to them: “Sit down for a little while and rest”. After this, my father spoke with the man he had sent for he who had robbed the businessman’s house and said to him: “My son, go and give back to the man the possessions which you stole and carried away, and I will make him give you a few of them”. The man was afraid and said to my father: “My holy father, it was not I alone who carried them off. My father said to him: “I know that too, my son.” The man said to my father: “If he will not tell any-one at all, I will take him and give him back his possessions complete and intact”. Then my father called the businessman and made him take an oath, saying: “I will never reveal the matter to the day of my death.” So he took him and gave him back all his possessions as they were, just as our father Abba Shenoute had commanded, and the businessman gave him a small portion of his possessions and sent him away.

Afterwards, the businessman came back again to our father the prophet and received his blessing. My father Abba Shenoute said to him: “Look, my son, you want to go to the city of Alexandria, do me this favour: after you arrive, buy the first thing you come across for sale and bring it to me. Whatever you give for it I will give to you when, by God’s will, you return to me.” On his way to Alexandria, the businessman arrived at Chereu, and as soon as he dis-embarked from the ship, he found a man who had a silver portable-altar which the man had stolen and carried off from one of the monasteries of our father Abba Shenoute, the faithful man. When the businessman saw the altar he said to himself: “If I buy this silver altar and take it to the great man of God, I will be ashamed to take anything from him, for he had pity on me, told me about my possessions, and had them given back to me. I will not buy it, lest I lose something else with my own hands! And when he went into the city of Alexandria and again met the man with the altar, he did not buy it. After another two days he once more met the man carrying the altar in everyone’s presence, and again he did not buy it. When the businessman had sold his wares and went down to the river to board the ship, the man came again with the altar, and again he did not buy it. But one of the sailors on the ship which the businessman boarded bought it for four gold St Mary Church Sunday School group praying pieces, and he said to himself: “I will take it to the sanctuary of Abba Shenoute, the man of God.”

After a month had passed, that businessman the one to whom my father gave back his possessions which had been stolen came to the monastery. It was he to whom my father had said: “Buy the first thing you come across for sale and bring it to me,” but he had not bought it (I mean the altar which the sailor had bought for my father). The busi-nessman said to my father: “While I was out walking, I dropped a purse of gold, and I do not know where it fell.” Now it was actually the sailor who bought the altar who had found the purse of gold which he had dropped, and it con-tained sixty pieces of gold. But the businessman did not know this, and instead he entreated my father in tears, saying: “Let your mercy come upon me!” My father Abba Shenoute said to him: “This is destiny; the riches of this world are like a prostitute: she is in your house today, but tomorrow she makes a contract with someone else. Now, my son, God has given the gold you lost to whom he will, and you will never ever find it.” So the businessman went away with anguish in his heart and in great shame.

From the Life of St Shenouda 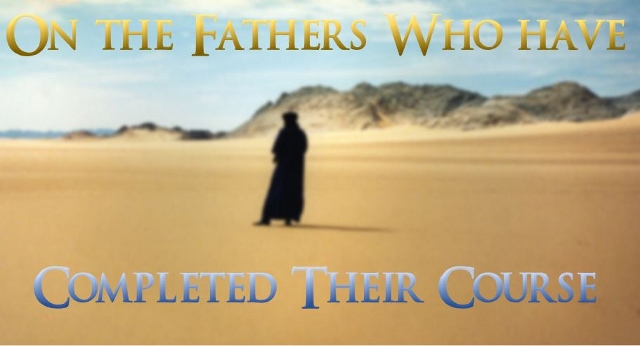 On The Fathers Who Have Completed Their Course

St. Isaac the Syrian - January 10, 2017
0
The powers of heaven stand ready in their ranks to advance with fear before the Bridegroom as he comes in glory on the clouds...