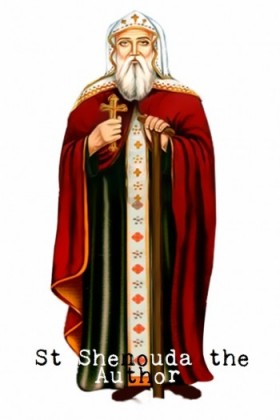 The act of writing held an almost sacred place in early Christianity. In putting word to parchment or papyrus, the Christian author ritually and mimetically recalled the incarnation of the divine Word (Iogos) in material form. As Derek Krueger has written, “From the perspective of late antiquity, the connection between logos and body always already underlies the craft of composition: the practice of writing is the embodiment of the logos.” For his ancient readers and listeners, St Shenouda’s writings about the body constituted a writing of the body as a sacred and powerful site for the renunciation of evil.

For the historian of Christianity, St Shenouda’s writings hold a certain power as well. The nature and scope of St Shenouda’s written sources are vast. His texts provide an exceptional resource for the study of early monasticism in general and the social construction of the body in particular because his corpus currently represents the largest library of texts written by such a prominent figure in early Egyptian monasticism. Over the course of his long life, he produced volume upon volume of letters, sermons, monastic rules, and treatises, all in the Sahidic dialect of the Coptic language. Much of the remaining St Shenoudaan research to date has come in the form of linguistic studies and textual translations. As one of the largest single collections of Coptic literature, St Shenouda’s writings have provided an important resource to linguists of Coptic and other Egyptian languages. Some have claimed that St Shenouda’s monastery housed one of the primary libraries responsible for translating the Christian scriptures and other Greek Christian writings into Coptic. But his texts also provide a rare literary source for life in a fourth and fifth century ascetic community as it was portrayed by a contemporary participant. St Shenouda supplies provocative descriptions of significant disputes in the monastery’s community, a lengthy reproduction of their monastic rule, extensive biblical interpretations in support of his decisions and rulings, elaborate parables and prophecies regarding the spiritual state of the community, detailed accounts of his own and his monks’ activities, and considerable theological sermons and tractates.

When the extant texts of St Shenouda’s corpus are measured against the remaining documents from better known figures, such as St Pachomius or St Antony, the textual legacies of the more famous monks seem sparse by comparison. Moreover, some of the most frequently used sources on Egyptian monasticism either are one or two generations removed from the circumstances that they describe or were written by authors who were not Egyptian ascetics.

Although St Shenouda did not write traditional, systematic treatises on Trinitarian or Christological topics, he did write extensively on the nature of God and on the relationship of his community with God. His theorizing about the nature of coenobitic monasticism and its role in Christian salvation is as sophisticated as the list of his violent actions against pagans, heretics, and fellow monks is long.

By far, the primary reason behind the lack of research on St Shenouda remains the sorry state of the manuscript tradition. Almost all of the manuscripts containing St Shenouda’s works were preserved only in the library of Deir Anba St Shenouda. Most of the extant manuscripts date from the ninth to the twelfth centuries.” As time passed, knowledge of the Coptic language was lost, and these texts were eventually considered refuse by the monastery. Western Europeans “discovered” St Shenouda’s monastery in the seventeenth century and began plundering the remains of the library in the eighteenth century. Throughout the eighteenth through twentieth centuries, the manuscripts were dispersed to libraries and private collections in Europe and the United States. Frequently a codex was removed piece by piece to different locations, and as a result, parts of the same codex and even the same text currently reside in collections in different countries, or even continents. Lamentably, none of the original codices has survived in its entirety, even scattered among various collections. though most of the extant St Shenoudaan documents likely have been identified, scholars nonetheless hope to continue to locate new fragments that currently reside undiscovered or unidentified in museums, libraries, or possibly even private collections.”

The turn of the twenty first century has witnessed somewhat of a renaissance of St Shenoudaan scholarship, due in large part to Stephen Emmel’s codicological reconstruction of the remaining manuscripts of St Shenouda’s writings, completed in 1993. For the first time, scholars may reconstruct individual texts written by St Shenouda and examine them in their entirety.

In his codicological reconstruction of these disparate fragments, Emmel has discovered that the surviving texts were divided into two major categories: the Canons and the Discourses. The Canons of St Shenouda contain texts written primarily to the women and men of the monastery and seem to have been organized and compiled into nine volumes by St Shenouda himself. The Discourses consist of public sermons, letters, and other texts that seem to be written for a more public audience and are referred to in the codices as epistole or logos. The eight volumes of the Discourses were probably organized for liturgical or lectionary purposes and likely were not compiled by St Shenouda himself. They also contain miscellaneous letters to and from St Shenouda that have been used to fill up extra space in the back of the codices. Deir Anba Shenouda’s library contained additional lectionary codices that were not designated as volumes of the Discourses. Emmel is currently coordinating a team of senior scholars who plan to publish critical editions of the Canons over the next decade.

Abba Wissa - February 27, 2016
0
In a word, great signs and a multitude of miracles were worked by our father abba Shenoute, truly the true prophet and the bearer...