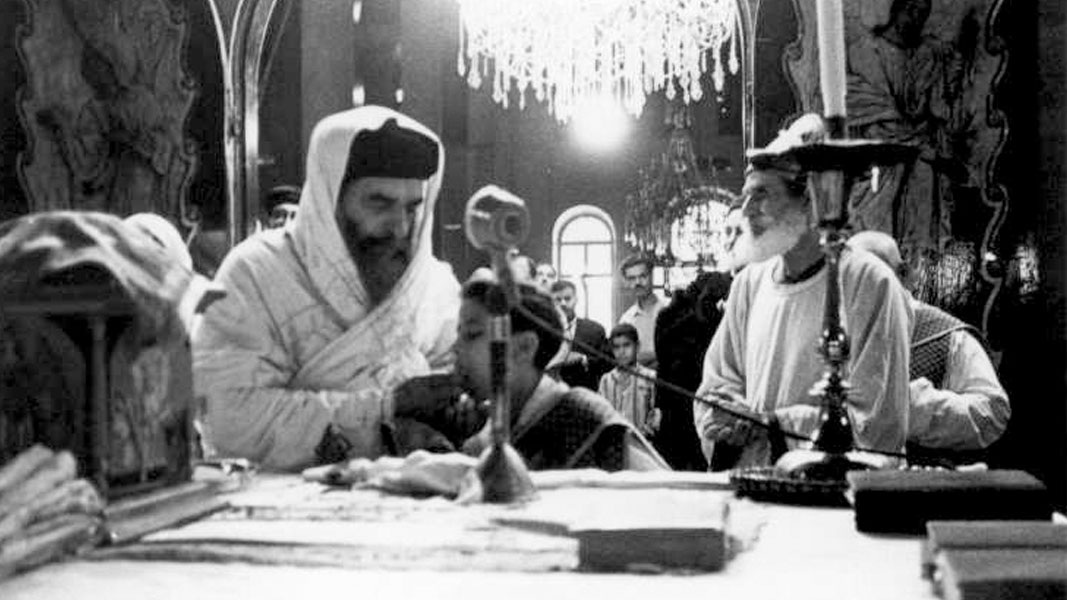 On this day of the year 1687 AM (March 9, 1971 AD) the saintly Pope Abba Cyril, the one hundred and sixteenth among the holy fathers the Patriarchs of Alexandria departed. His name before becoming a monk was Azer Yousef Atta. Born August 8, 1902 AD (Mesori 2, 1618 AM) in the city of Damanhour to devout Christian parents. An old blind monk named hegoumen Tadros Al Baramousi used to visit the family and Azer, ever since age four used to remain close to that monk as long as his visit lasted. One night he slept on the knees of the old monk. His mother wanted to take him away but the monk told her, Leave him, he belongs to us!

When he grew up he worked for Cox company in Alexandria after finishing his studies in 1921 AD. He always preferred to stay alone in his room studying the holy Bible. He also was diligent in studying the Churchs rites, praises and hymns. His love for the monastic life was evident from the fact that he preferred to sleep on the floor rather than his bed, and his food was basically a piece of bread. He continued in this monastic way of life for five years before joining the monastery.

In July 1927, he entered the Baramous monastery during the papacy of Pope Cyril V (112th Patriarch of Alexandria) He remained as a candidate for several months and when the monks nominated him for the monastic life he was ordained as monk Mina Al- Baramousy. He chose the name Mina since he was attached to the memory of Saint Mina the wonder worker and considered him his patron saint.

On Sunday July 18, 1931 he was ordained a priest. While staying in the monastery he joined the seminary at Helwan. When he heard that Pope Youannis (113th Patriarch of Alexandria) intended to ordain him as a bishop, he fled into upper Egypt where he stayed in the monastery of St. Shenouda in Souhag. He later met the Pope and confided in him that he wishes to be an anchorite. The Pope agreed to his request and assigned a pious elderly monk named Hegoumen Abdel Massih Al Baramousy to be his spiritual guide. He lived in a cave that was one hour walking distance from the monastery. He used to come to the monastery Saturday night to wash his clothes as well as those of the other monks and to attend Vespers and the Sunday Liturgy for communion.

Early in 1936, he started to live in a deserted mill in the desert of Old Cairo, where he diligently held a daily liturgy. In 1941 he was assigned to be the abbot of Abba Samuel the Confessor in Maghagha. He renovated the monastery and the church and built new cells for the monks. Many pious monks became his disciples. The new church was consecrated by the late Bishop Athanasius of Beni Sweif who gave him the rank of Hegoumen. He frequently went back to the old mill to pray.

In 1947 he returned to Old Cairo, where he built a small church named after St. Mina using the meagre contributions that he received. He participated in the actual building with the workers. In that church several pious monks became his disciples, many of whom later became bishops of the Church. In 1949 he annexed to the church a student resident for out of town students.

Hegoumen Mina Al baramousy became famous for ceaseless prayer and strong faith. Many who were afflicted by various diseases came to see him from all over the country and they were healed through his prayers. God honoured him by these miracles both during his life as well as after his departure.

When Pope Yousab II (115th) departed, a Presidential decree was issued on November 13, 1957 concerning the regulations for the election of the new Pope of Alexandria. The long process of nominations and elections were concluded and an altar lot was drawn following the Divine Liturgy at the Great Cathedral of Saint Mark on April 19, 1959. The liturgy was attended by all the clergy of the Church and the anchorite Hegoumen Mina Al Baramousy was chosen to become the 116th successor of Saint mark the apostle.

His ordination took place on Sunday May 10, 1959 as Pope Cyril VI, Pope of Alexandria and Patriarch of the See of Saint mark. In June 28, 1959, His Holiness ordained a Patriarch Catholicos for the Church of Ethiopia and a protocol was signed between the two churches ascertaining the mutual love between them.

In November 1959 His Holiness put the foundation stone of the monastery of the great martyr Saint Mina the wonder worker in the wilderness of Mariot and returned his relics there. He also built several churches and a great cathedral that is almost as great as the old cathedral (that was built by St. Athanasius the Great.) His Holiness also renovated the old Cathedral of saint Mark which was built a century ago and adorned it with beautiful icons. In 1967 His Holiness compounded the holy Myron, which was a historical occasion, since this was the 26th time this was done during the history of the Coptic Orthodox Church.

In April 2, 1968 the immaculate Mother of the Light Saint Mary was transfigured on the domes of her church in Zeitoun, a suburb of Cairo. This was a heavenly revelation unsurpassed since the coming down of the Holy spirit on the holy Disciples on the day of Pentecost. The holy virgin appeared in a celestial light that no man can describe. The apparitions continued for many days together with celestial bodies and luminous doves and fragrant incense. Thousands who had diverse incurable diseases were healed, for the blind received their sight and the paralytics were cured and the lame walked from all religions and nationalities. Joy and comfort filled all and they glorified God exceedingly.

In June 1968 His Holiness received the relics of Saint Mark after sojourning away from Egypt for close to eleven centuries. He laid it to rest in a reliquary specially built under the altar of the great cathedral of Saint mark which His Holiness had built and which was inaugurated in a magnificent celebration attended by the then President Nasser as well as the late Emperor HaileSilasi of Ethiopia, delegates from churches all over the world and multitudes of Copts.

Pope Cyril VI never forgot that he is the poor monk Mina the anchorite. His food was very simple. Many days he would subsist on a meal of dry bread, salt and cumin. During Lent and the fast of the holy Virgin he would eat one meal at night after the conclusion of his daily liturgy and which concluded in the evening. His clothes were simple and he slept very little.

He was diligent in singing midnight praise daily. He started it before sunrise. His daily liturgy was serene and profound sung in a low voice with his face looking down and his eyes closed. He prayed almost without tune in reverence and compunction, often crying profusely so much so that those who saw him cried. He was the first pope in a generation to have an open door to everyone. Anyone could sit with him and talk to him without barriers or impediments. He guided those were lost and reformed those who were crooked.

He prayed for these who needed help so much so that the lives of those who encountered him were noticeably renewed. How many were healed by him and how many demons were exorcised by a simple word of his blessed mouth and how many problems were solved through his prayers. At evenings he always attended Vespers, thus his whole day was spent in prayer whether in church or in his cell or while meeting people. While he walked or ate he always recited the psalms raising his mind and his heart and indeed all his senses towards God. No wonder he was known as a man of prayer and miracles.

When God wanted to give him rest from the afflictions of this present age, he revealed to him with many celestial revelations that he often told to his loved ones. He had a brief illness, and on the day of his departure he received a number of his children and when the last one went away (and he was a priest) he raised the cross and said (May the Lord arrange your affairs) He then entered into his cell and gave up his pure soul into the hands of God whom he served. He was buried under the altar of the new Cathedral which he had built.

On Hathor 15, 1688 (November 25, 1972) his pure relics were translated to the monastery of saint Mina at Mariot according to his hand written will, in a dignified ceremony so that he can be beside his great intercessor Saint Mina. On the day of the translation of his relics heaven honoured this great saint for the sky thundered and rain came down in such a way that had never been seen before.

May the blessing of this apostolic saint be with us and Glory be to our Lord forever. Amen.

The Memory of Death

Fr Anthony St Shenouda - February 8, 2016
0
The Biography of St Anthony “Vita Antoni” written by St Athanasius in the 4th century was and still is a source of inspiration to...