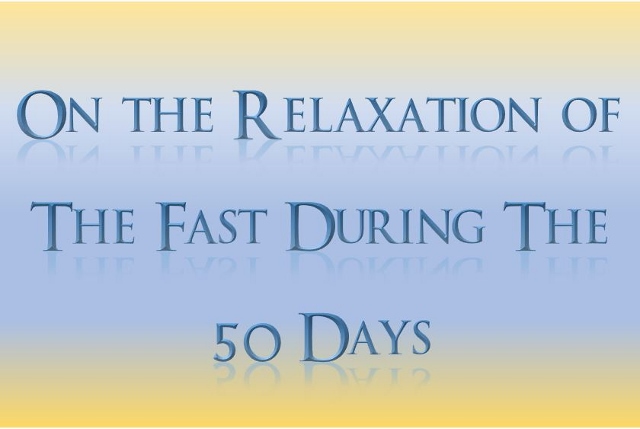 Abba Theonas visited us in our cell, and when evening prayers were over and we had been sitting for a short while on the ground we began to question him in considerable detail as to why they were so careful that no one ever kneel in prayer during all of Pentecost or presume to fast until the ninth hour, and we sought to understand this with so much the more diligence because we had never seen it observed with such care in the monasteries of Syria.

There upon Abba Theonas began to speak as follows: It certainly behooves us, even when the reason for it has not been grasped, to yield to the authority of the custom of our forebears which has existed for so many years, up until our own day, and to maintain it, as it was passed on of old, by a constant and reverent observance. But since you want to know the causes and the reason for this, listen for a short while to what has been passed down by our elders about this custom.

It has therefore been determined that none of these things is a permanent good, except when it is carried out at the right time and in correct fashion. Thus, the very things that turn out well now, since they were done at the right time, are found to be disadvantageous and harmful if they are tried at an inopportune or inappropriate moment. The only exception to this is those things that are essentially and of themselves either good or bad and that can never be turned to their contraries, such as justice, prudence, fortitude, temperance, and the other virtues.

If we include fasting among those things that are understood as virtues, by placing abstinence from food among the essential goods, then eating will be utterly evil and sinful. For whatever is contrary to an essential good is certainly to be considered essentially evil. The authority of Holy Scripture does not permit us to say this, because if we fast with such an understanding and attitude as to believe that we commit sin when we eat, then not only do we gain no fruit from our abstinence but, according to the Apostle, we even bring upon ourselves very grave guilt and the crime of sacrilege: They abstain from food that God created to be eaten with thanksgiving by the faithful and by those who know the truth. For every creature of God is good, and nothing is to be rejected that is received with thanksgiving.If someone wants to maintain an austere fast when a brother comes, in whom he should refresh Christ hospitably and embrace him with a most gracious welcome, would he not be committing a sin of inhospitability rather than gaining the praise and virtue of religious devotion? Or if someone refuses to relax a rigorous abstinence when fleshly weakness and frailty demand that he recruit his strength by taking some food, should he not be considered the cruel murderer of his own body rather than the procurer of his salvation? Likewise, when a time of celebration permits the pleasant glow that comes from eating and a meal that is necessarily abundant, if someone wishes to hold to a rigid and unbroken fast, he will certainly be seen not as devout but as confused and irrational.

Consistently maintaining this understanding of the character of fasting, then, we should seek after it with all our strength, while yet knowing that it is only appropriate for us if it is practiced at the right time, with the right character and to the right extent, and not fixing all our hopes on it but making it possible for ourselves thereby to attain to purity of heart and apostolic love. From this it is clear, then, that fasting, for which not only special times have been assigned as to when it should be practiced or omitted but for which even a certain character and set measure have been determined, is not an essential good but something indifferent. But the things that are, by an authoritative precept, either commanded as good or forbidden as harmful are never dependent on particular times, such that what has been prohibited may sometimes be done, while what has been ordered may sometimes be passed over. For no measure has been set for jus­tice, patience, sobriety, purity, or love. Nor, on the other hand, has permission ever been freely given for injustice, impatience, wrath, impurity, or hatred.

Featured Article - March 11, 2016
0
Enacted assimilation of the text, points us beyond the mind and heart to consider another dimension of monastic prayer, the use of the body....