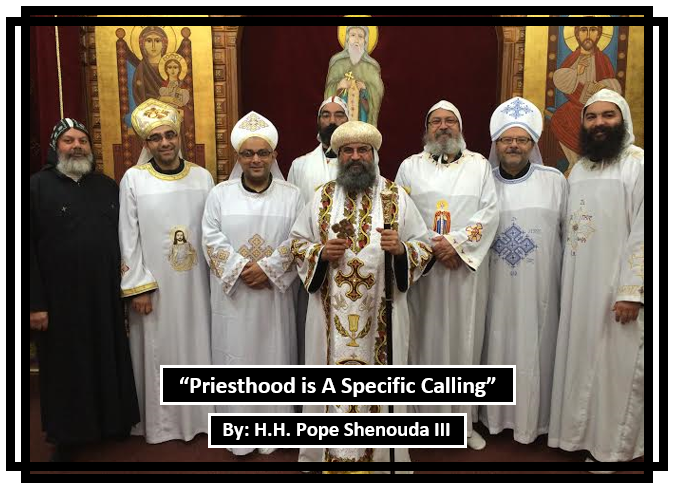 In The Transitional Period Between The Old And New Testaments John the Baptist Was Commissioned by God (John 1:6-7) There was a man sent from God, whose name was John. This man came for a witness, to bear witness of the Light that all through

If Priesthood Is A Specific Calling, Selection And A Mission From God, Then It Is Not For Every Person, But For Those Selected And Called By God. In God’s Kingdom, and as the Sovereign King, selects His servants. He calls and commissions them so that they would not work on their own but according to His command. (Exo 25:9) “According to all that I show you, that is, the pattern of the tabernacle and the pattern of all its furnishings, just so you shall make it.

This commandment, did not only apply to apostolic rank only, but to their successors the bishops as well. Here we see Saint Paul commanding the bishops at Ephesus; (Acts 20:28) “Therefore take heed to yourselves and to all the flock, among which the Holy Spirit has made you overseers, to shepherd the church of God which He purchased with His own blood.

The Lord Jesus ordained His disciples granting them the Holy Spirit and the Episcopal Authority. The Lord describes such ordination as: (John 20:20-23) When He had said this, He showed them His hands and His side. Then the disciples were glad when they saw the Lord. So Jesus said to them again, “Peace to you! As the Father has sent Me, I also send you.” And when He had said this, He breathed on them, and said to them, “Receive the Holy Spirit.”If you forgive the sins of any, they are forgiven them; if you retain the sins of any, they are retained.”

This Holy Breath Still Upheld And Is Handed Over From Generation To Generation. In the ordination of priests, the ordained opens his mouth while the chief priest (bishop) breathes on him and says, “Receive the Holy Spirit”. The new priest then recites a portion from psalm 119 which says “I opened my mouth and for myself, I attracted a Spirit”.

By The Laying Of Their Hands, The Apostles Ordained Bishops, Priests And Deacons and Gave Them The Holy Spirit Laying on of the hands on specific people shows that the priesthood is not for all. Refer to Acts Chapter 6, on how the seven deacons were ordained.

THE LAYING ON OF HANDS

When the Church needed the service of the new deacons, did they volunteer themselves, or submit an application to be appointed?

It is obvious that this was never the case, but we see that the apostles set the rule for selection as stated by the Book of Acts; (Acts 6:3) “Therefore, brethren, seek out from among you seven men of good reputation, full of the Holy Spirit and wisdom, whom we may appoint over this business;

Here we should also ask a couple of questions

We see that none of the elected were authorised to commence their work until the apostles had laid their hands on them. Even the deaconship, no one can carry out its duties without canonical ordination. (Acts 6:5) And the saying pleased the whole multitude. And they chose Stephen, a man full of faith and the Holy Spirit, and Philip, Prochorus, Nicanor, Timon, Parmenas, and Nicolas, a proselyte from Antioch, Stephen was not only full of the Holy Spirit, but he was also full of faith, however he still needed ordination. Stephen was a miracle performer with the gift of healing, but still required the “Laying on of Hands”. (Acts 6:8) And Stephen, full of faith and power, did great wonders and signs among the people.

The Church Is Of Principal Importance As The Only Channel To Canonise The Ministers. Here we see that the being full of the Spirit and wisdom, full of faith and power, capable of performing miracles did not automatically admit Saint Stephen to assume the grade and the duties of deaconship. He had to first be canonised and sent by the Church. He had to receive the “Laying on of Hands” to assume his office and obtain the authority to serve. Hence it is not for those who desire it or those who seek after the position.

Why Do The Monks Wear Black?

Fr. Matthew the Poor - January 4, 2017
0
In His forty days experience of absolute fasting, Christ laid down for us the basis of our dealings with our enemy—along with all his...