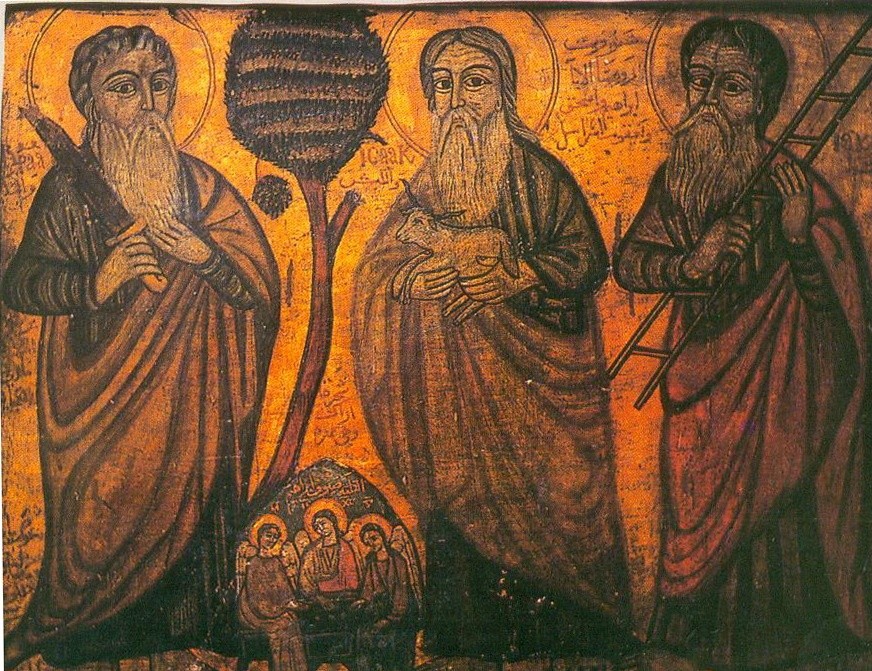 Truly, when I consider our fathers of old, I feel like one who has never known God. Is it not a marvel that our fathers the Patriarchs Abraham, our father Isaac, our father Jacob married wives, raised children, took wives for their sons, gave their daughters to husbands, made marriage feasts for them, made great banquets when they weaned their sons, as it is written, “Abraham made a great banquet on the day when Isaac, his son, was weaned” (Gen. 21:8). They held celebrations, they ate, and they drank in moderation. Every kind of livestock they had in abundance! They had gold in abundance, silver in abundance! They had all their property in abundance, wealth in every form! Yet the Lord God spoke with them, telling them everything, and He nourished them. Their houses were full of every good thing. And His angels guarded them, as Jacob said, “”It is God who nourishes me from my youth, His angel who keeps me from every evil” (Gen. 48:15f.). And not only that but, through them, many upon earth were blessed. Their heritage was apportioned to a multitude of men, as many as the sands. But also concerning those who go to God — all those who die among us, we Christians, from king to priest even to the martyrs who shed their blood, the Scripture says concerning them, “You will give rest to them in the bosom of Abraham and Isaac and Jacob” (Lk. 16:22). Why have these honors and this great glory come to them? Is it not on account of their faith and their love for the Lord God and their sinlessness? As the Lord said to them, “Do what is pleasing in My presence and be sinless and let Me establish My covenant with you” (Gen. 17:10). And above all, there is their hospitality. Or do we not read about these things in their whole life?

But we wretched ones, we make ourselves poor, we are hungry, we thirst, we bear a host of afflictions, saying, “It is for God’s sake that we do these things,” even down to our inferior clothes and food, so that often we may not consume even water to satisfaction, much less wine or meat or numerous other things. Our heart has dried up; our belly has dried up; our flesh has dried up. But sins of every kind from the demon adversary have not dried up within us. Many times we desire only to cool our tongue on account of thirst, since it is like something withered. Yet still it slanders, or rather we slander by it, and we gossip, we ridicule, we destroy the hearts of others, we envy, we hate, we argue, we do these things and many others and do not despise them.

I know that it grieves you to hear these words. However, blessed are they whose flesh and stomach and mouth are dried up for Jesus’ sake, and in whom all that is evil is even more than dried up. Blessed are they whose eyes have failed on account of thirst for Jesus, because they have blinded the devil. And he is indeed blind compared to those with whom Jesus abides.

The wall may be good which encircles the city. But if a watch is not kept upon it, the barbarians will take the city, like one which has no defense. The works of the man who labors bring him benefit. But when he is not vigilant in labor, sin will despoil him like those who could not grieve because they had given themselves over to pollution, for the working of every impurity.

Moreover, if a city has small walls, and they have not been raised very high, and yet it resists its enemy and is victorious over him, truly this is a shame and a reproach to another city which had been taken though its walls were great. I say this because, if there is a man whose good deeds are few but who fights against sin and conquers it, this is a shame and a reproach to the man who embraces good works and yet is conquered by sin.

For it is fitting for us truly to be faithful even to death, (Rev. 2:10), O beloved brothers, to exercise ourselves in all piety (1 Tim. 4:7) in order that we may escape from the threat of reproach before the holy judgment seat in the day of our arraignment in the court of God, when all the angels stand before him, with the Archangels, the Cherubim, with the Seraphim, the Authorities, the Dominions, and the glories, awaiting the verdict which will come. Concerning this the Savior said, “Let your loins be girded, your lamps full; become like servants who anticipate when their Lord shall return to the bridal chamber, in order that, when he comes and summons them, they may open to Him immediately. Blessed are those servants” (Lk. 12: 35-37). If a man keep himself from the ways of this world, his heart will receive light from the Scriptures.