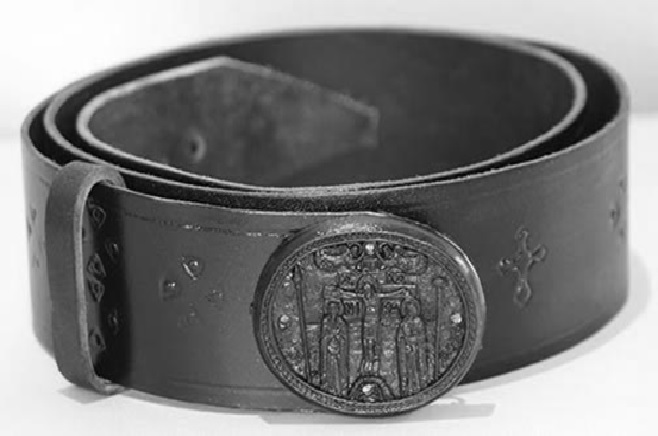 As we start to speak of the institutes and rules of monasteries, where could we better begin, with God’s help, than with the very garb of the monks? After having exposed their outward appearance to view we shall then be able to discuss, in logical sequence, their inner worship. And so, it is proper for a monk always to dress like a soldier of Christ, ever ready for battle, his loins girded.

For the authority of Holy Scripture makes it clear that those who in the Old Testament were responsible for the begin-nings of this profession namely, Elijah and Elisha went about dressed in this way. And we know that thereafter the leaders and authors of the New Testament namely, John, Peter, and Paul and other men of the same caliber behaved likewise. When the first of these, Elijah who already in the Old Testament manifested the flower of virginity and examples of chastity and continence, was sent by the Lord to protest with the messengers of Ahaziah, the sacrilegious king of Israel, because when he was sick he sent them to consult Baal-Zebub, god of Ekron about the state of his health, and the prophet met them and said that he would never get out of the bed in which he was wasting away, the smitten king realized who he was as soon as he learned how he was dressed.

For when the messengers returned to him and informed him of the prophet’s words, he asked them about the appearance and clothing of the man who had met them and spoken like that, and they replied: “He was a hairy man, and his loins were girded with a leather belt.” From his clothing the king at once pictured the man of God, and he said: “It was Elijah the Tishbite.” He clearly recognized the man of God by his belt and by the hairy and unkempt aspect of his body because, among so many thousands of Israelites, this particular style was always associated with him; it was as it were a kind of trademark of his.

The evangelist also says as follows about John, who served as a sort of sacred boundary between the Old and New Testaments and who was an end and a beginning: ‘This John wore a garment of camel hair and a leather belt around his loins.”‘ Likewise, when Peter was thrust into prison by Herod and was going to be put to death the following day, he was ordered by an angel who stood by: “Put on your belt and sandals.”‘ The angel of the Lord would certainly not have admonished him to do this if he had not seen that he had freed his weary members for a short while of the accustomed constraint of his belt in order to get a night’s rest.

So, too, when in Caesarea the prophet Agabus met St Paul going up to Jerusalem, on his way to being put in chains by the Jews, he took his belt and bound his own hands

and feet in order to show by this gesture of his what he would suffer, and he said: “Thus says the Holy Spirit: This is how the Jews will bind the man whose belt this is and hand him over to the gentiles.” The prophet would surely not have been able to speak out and say “the man whose belt this is” if Paul had not been in the habit of always putting it around his loins.

There are some other things in the garb of the Egyptians that pertain not so much to the well-being of the body as to the regulation of behavior, so that the observance of simplicity and innocence may be maintained even in the very character of their clothing.

Featured Article - March 25, 2016
0
In 407, a tribe of barbarian raiders known as Mazices came sweeping off the Libyan desert and devastated one of the first great centers...