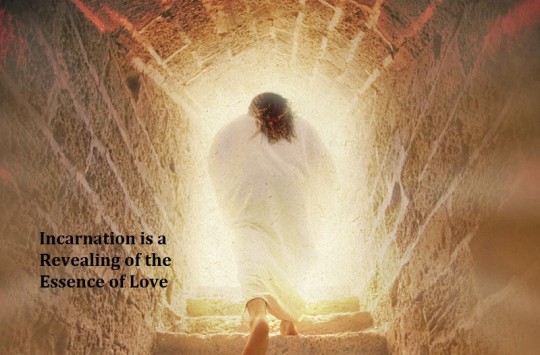 If the aim of man’s creation is for this unique creature to enjoy a life of sacred unity with God, then the incarnation can also be understood from the perspective of love. For just as God loved man and created him to enjoy life and have happiness; He gave him His love, His glory. God came to him and took his form and was incarnate in order to restore to him the life of sacred unity. Thus God became man in order to revive us from our fall and raise us from our death and grant us eternal life after death, which we justly deserved due to Adam’s (our first father) disobedience.

On this, the Holy Gospel says “For God so loved the world that He gave His only begotten Son, that whoever believes in Him should not perish but have everlasting life” (John 3:16). It was the intention of the Father to satisfy the hunger of this creature, in which case He has provided him with the true living bread, and granted him through His incarnation the partaking of the living bread, which descended from heaven. Therefore, the Lord said with His pure mouth that whoever eats Me will live by Me (John 6:51-58).

If sin has torn the unity between God and man, then the Lord Christ has restored it through His incarnation and has abolished it into eternity. It is only through His person can man encounter God. Unity between divinity and humanity was unification without mingling, confusion or alteration. This is what the Apostle Paul voiced in his letter to Ephesians “just as He chose us in Him before the foundation of the world, that we should be holy and without blame before Him in love” (Ephesians 1:4). Likewise the Son said to the heavenly Father “And I have declared to them Your name, and will declare it, that the love with which You loved Me may be in them, and I in them” (John 17:26)

The heavenly Father’s intention was that the Son would unite with man in his humanly nature to resemble His brothers in everything just like St. Paul the Apostle, the author of the book of Hebrews says “Therefore, in all things He had to be made like His brethren, that He might be a merciful and faithful High Priest in things pertaining to God, to make propitiation for the sins of the people” (Hebrews 2:17).

Also he says “the children have partaken of flesh and blood, He Himself likewise shared in the same, that through death He might destroy him who had the power of death, that is, the devil, and release those who through fear of death were all their lifetime subject to bondage” (Hebrews 2:14-15). From that we can confer that the love of the Holy Trinity is the perspective from which we can understand the doctrine of God’s incarnation and it carries two completely different dimensions: The salvation from man’s sin and secondly the unity of Page 4 Page 5 man in life with God. “that which we have seen and heard we declare to you, that you also may have fellowship with us; and truly our fellowship is with the Father and with His Son Jesus Christ” (1 John 1:3) “For as in Adam all die, even so in Christ all shall be made alive” (1 Corinthians 15:22).

I Sought Him, But I Did Not Find Him