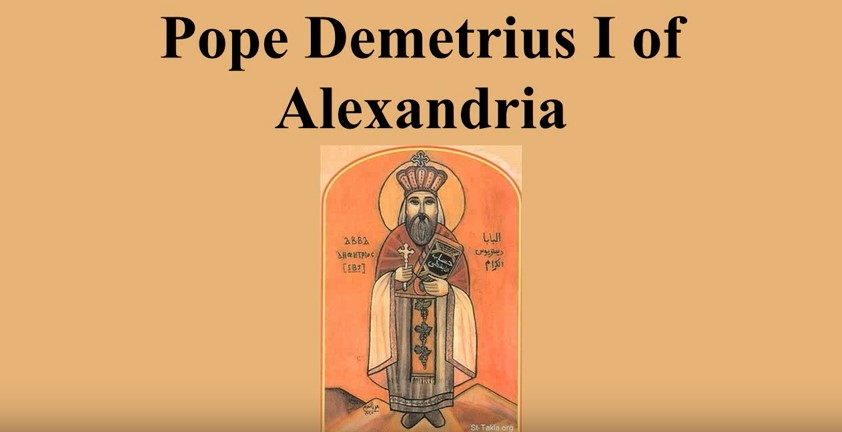 The Twelfth Day of the Blessed Month of Babah.

1. The Departure of Abba Demetrius I, 12th Pope of Alexandria.

2. The Martyrdom of St. Matthew the Evangelist.

3. The Commemoration of the Archangel Michael.

1. On this day of the year 224 A.D., the pure and celibate father, the fighter of lusts, and the vanquisher of nature, Abba Demetrius I, 12th Pope of Alexandria, departed. This saint was an illiterate farmer, and was married. He lived with his wife 47 years until he was chosen a Patriarch.

They did not know one another as married people, but remained throughout that period in their virginity and chastity, a fact which no one knew.

When the departure of St. Yulianus, 11th Pope, drew near, the angel of the Lord appeared to St.Yulianus in a vision and told him about this saint and that he was to be the Patriarch after him. He gave him a sign saying, “Tomorrow a man shall come to you having a cluster of grapes, seize him and pray over him.” Then he woke from his sleep, he told the bishops and the priests who were with him about this vision.

So it happened on the next day that St. Demetrius found a cluster of grapes that was out of season. He carried it to St. Yulianus, to receive his blessing. The father, the Patriarch, took him by the hand and told those who were present, “This is your Patriarch who will be after me.” Then he prayed over him; they held him and kept him until the departure of Abba Yulianus, whereupon they finished the prayers of ordination over him and he was filled with heavenly grace. The Lord enlightened his mind and he learned reading and writing. He studied the church books and their interpretations. Words of grace flew from his mouth when he preached.

He established the reckoning of the Epacts, by which the dates of fasting were determined on a fixed basis. Christians used to fast the holy 40 days, Lent, right after the feast of Epiphany, as the Lord Christ fasted after His baptism. Then they fasted the Passion week separately, celebrating the Christian Passover on the Sunday that followed the Jewish Passover.

Some of the Christians used to celebrate Easter on the fourteenth of Neesan (April) and that meant they celebrated with the Jews, not recognizing that the Christian Passover was to be in memory of the Resurrection of the Lord Christ which was after the Mosaic Passover. For that reason, Pope Demetrius took interest in establishing a fixed bases for fasts and Christian holy days. He appended the Holy Fast to the Passion Week.

Pope Demetrius wrote in this respect to Agabius, Bishop of Jerusalem; to Maximus, Patriarch of Antioch; to the Patriarch of Rome and to others. All approved of it and continued to follow his rules up until the present. The Church of Rome deviated from that and followed, since the 16th century, the Gregorian Calendar. To the Popes of the Coptic Church was the prime credit in determining Easter Day; and they thus sent their Easter messages all over the world, so that the Christians would celebrate Easter on the same day forming a universal joy.

God was with Abba Demetrius because of his purity. God granted him a gift that after he finished the Liturgy and the people came forward to partake of the Holy Mysteries, he used to see the Lord Christ pushing forward with His Hand those who were worthy. But if one came forward who was not worthy of partaking of the Holy Communion, the Lord would reveal to the Pope his sins and the Pope would not allow him to partake of it until he confessed his sins. The Pope would admonish him for them and would say to him, “Turn away from your sin and repent, after that come and partake of the Holy Mysteries.” His flocks conduct was straightened during his time.

Because he rebuked the sinners much, and urged them on repentance and purity, some of them murmured and said, “This man is married, how can he rebuke us?” The Lord Almighty wished to reveal to them his virtues, so the angel of the Lord came to him at night and told him, “O Demetrius, do not seek your salvation and let others be destroyed with their doubt.” The father asked him to clarify his statement and the angel told him, “You must reveal the mystery which is between yourself and your wife to the people that you might remove the doubt from them.” On the following morning, after he had celebrated the Divine Liturgy, he ordered the people not to leave the church. He took red-hot coal and placed it in his wife’s shawl and his pallium, then they went around in the church and their clothes did not burn. The people were amazed at this miracle.

He told them that he and his wife did not know each other as married people. The doubt was removed from the people and they realized the purity of this father and his virginity.

During his time, some opposing men appeared whose names were Aklemos, Origen, and Orianus and others who wrote forbidden books, so he excommunicated them.

During the days of his papacy, he did not stop teaching and confirming the believers in the Orthodox Faith. When he had grown old and became weak, they carried him on a litter to the church to teach the people. He was 105 years old, having spent 15 years unmarried, 47 years until he became Patriarch and 43 years in office, then departed in peace.

The blessings of his prayers be with us. Amen.

His Delight Is In The Law Of The Lord 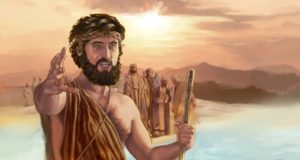 The Nativity of St John the Baptist

St Augustine - December 22, 2019
0
The Nativity of St John the Baptist The Church observes the birth of John as in some way sacred; and you will not find any...