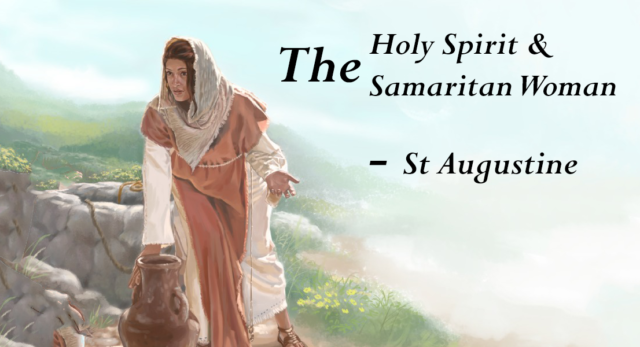 A woman came. She is a symbol of the Church not yet made righteous. Righteousness follows from the conversation. She came in ignorance, she found Christ, and he enters into conversation with her. Let us see what it is about, let us see why a Samaritan woman came to draw water. The Samaritans did not form part of the Jewish people: they were foreigners. The fact that she came from a foreign people is part of the symbolic meaning, for she is a symbol of the Church. The Church was to come from the Gentiles, of a different race from the Jews.

We must then recognise ourselves in her words and in her person, and with her give our own thanks to God. She was a symbol, not the reality; she foreshadowed the reality, and the reality came to be. She found faith in Christ, who was using her as a symbol to teach us what was to come. She came then to draw water. She had simply come to draw water; in the normal way of man or woman. Jesus says to her: Give me water to drink. For his disciples had gone to the city to buy food. The Samaritan woman therefore says to him: How is it that you, though a Jew, ask me for water to drink, though I am a Samaritan woman? For Jews have nothing to do with Samaritans.

What is this water that he will give if not the water spoken of in Scripture: With you is the fountain of life? How can those feel thirst who will drink deeply from the abundance in your house? He was promising the Holy Spirit in satisfying abundance. She did not yet understand. In her failure to grasp his meaning, what was her reply? The woman says to him: Master, give me this drink, so that I may feel no thirst or come here to draw water. Her need forced her to this labor, her weakness shrank from it. If only she could hear those words: Come to me, all who labor and are burdened, and I will refresh you. Jesus was saying this to her, so that her labors might be at an end; but she was not yet able to understand.

By: St Augustine
From: Treatise on the Gospel of St John

Featured Article - March 11, 2016
0
Enacted assimilation of the text, points us beyond the mind and heart to consider another dimension of monastic prayer, the use of the body....