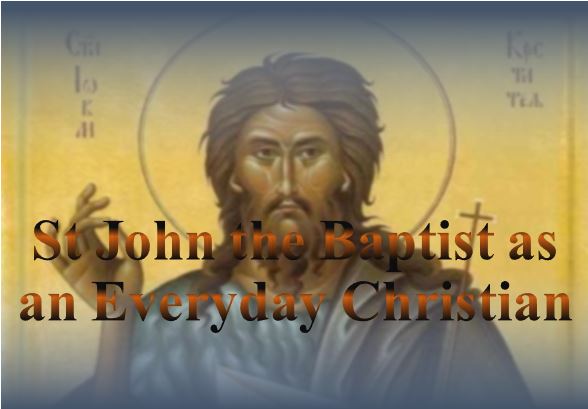 The Life of St John the Baptist has some very interesting aspects that can apply to every Christian today.

From The Angels announcement to his father Zachariah we know that he was specially chosen by God: “For he will be great in the sight of the Lord… He will also be filled with the Holy Spirit, even from his mother’s womb. And he will turn many of the children of Israel to the Lord their God. He will also go before Him in the spirit and power of Elijah.” (Lk 1: 13). We as Christian are all chosen in the same way by God. We also know that we are chosen by God before the foundation of the world “He chose us in Him before the foundation of the world, that we should be holy and without blame before Him in love.” Eph:1:4

Reading the life of St John the Baptist we realize that there is no specific time when he was called to serve. Going out and calling people to repentance was for him a result of a conviction that he knew how special he was to be called before his birth by God and his service is only a reaction to that immense love.

His mission was to prepare the way for Jesus’ coming, which is exactly my calling as a Christian, which is to be co-builders of Gods eternal kingdom. As said about him in the Gospel of St John “There was a man sent from God, whose name was John. This man came for a witness, to bear witness of the Light, that all through him might believe” (John 1: 6-7)

When we read passages that mention him in the Bible there is far more description of his personality and way of life than there are about what he said. His ascetic life, his witness for Christ, his humility in directing the focus on Jesus rather than himself, and his standing up for the truth regardless of the consequences are the highlight of his life.

So I guess the only difference between St John the Baptist and any other Christian is that he took his Christian calling seriously and this is why he deserved to be called the greatest born of a women.

H.G. Bishop Youssef - March 30, 2016
0
Anba Abraam was a saintly monk of the twentieth century. As it is said, "Therefore you shall be perfect, just as your Father in...