Home Lives Of Saints The Repentance Of A Harlot
Facebook
WhatsApp

One day Abba Serapion passed through an Egyptian village and there he saw a courtesan who stayed in her own cell. The old man said to her, ‘Expect me this evening, for I should like to come and spend the night with you.’ She replied, ‘Very well, abba.’ She got ready and made the bed. When evening came, the old man came to see her and entered her cell and said to her, ‘Have you got the bed ready?’ She said, ‘Yes, abba.’ Then he closed the door and said to her, ‘Wait a bit, for we have a rule of prayer and I must fulfill that first. So the old man began his prayers. He took the Psalter and at each psalm he said a prayer for the courtesan, begging God that she might be converted and saved, and God heard him.

The woman stood trembling and praying beside the old man. When he had completed the whole Psalter the woman fell to the ground. Then the old man, beginning the Epistle, read a great deal from the apostle and completed his prayers. The woman was filled with compunction and understood that he had not come to see her to commit sin but to save her soul and she fell at his feet, saying, ‘Abba, do me this kindness and take me where I can please God.’ So the old man took her to a monastery of virgins and entrusted her to the Amma and he said, ‘Take this sister and do not put any yoke or commandment on her as on the other sisters, but if she wants something, give it to her and allow her to walk as she wishes.’ After some days the courtesan said, ‘I am a sinner; I wish to eat every second day.’ A little later she said, ‘I have committed many sins and I wish to eat every fourth day.’ A few days later she besought the Amma saying, ‘Since I have grieved God greatly by my sins, do me the kindness of putting me in a cell and shutting it completely and giving me a little bread and some work through the window.’ The Amma did so and the woman pleased God all the rest of her life. 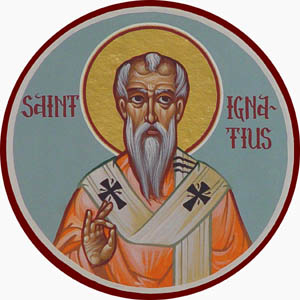 Early Christian Writings – The Epistle of St Ignatius to the...