Home Christian Living What Is The Purpose Of The Nativity Fast (Advent Fast)?
Facebook
WhatsApp 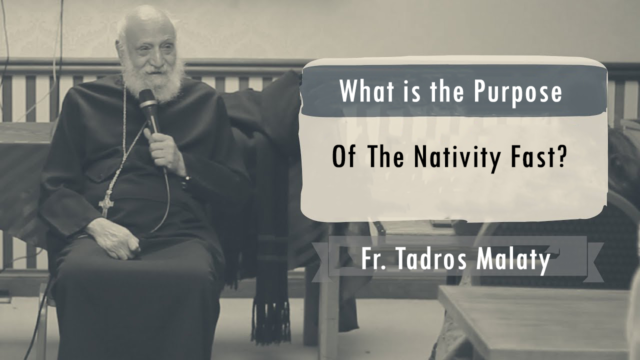 Why is the Coptic Church concerned with the Nativity Fast, in which her members fast for more than forty days? Undoubtedly, the Incarnation of the Word of God was the intention of God preceding the fall of Adam and Eve in sin. Upon their fall, the Divine Covenant was proclaimed when God spoke to the serpent, saying: “He shall crush your head, and you shall bruise his heel” (Gen 3: 15). Adam and his sons awaited the coming of the Messiah and the Deliverer for centuries.

It was difficult for the heavenly and earthly creatures to comprehend the Incarnation of the Word of God, His bearing the cross, and availing the faith of the new covenant to all humanity of all nations. The disciple states: “And without controversy great is the mystery of godliness: God was manifest in the flesh, justified in the Spirit, seen of angels, preached unto the Gentiles, believed on in the world, received up into glory.” (1 Timothy 3:16). “Even the mystery which has been hid from ages and generations, now is made manifest to His saints.” (Col 1: 26). He adds, “And to make all men see what is the fellowship of the mystery which from the beginning of the world has been hid in God, who created all things by Jesus Christ. To the intent that now unto the principalities and powers in heavenly places might be known by the Church the manifold wisdom of God, according to the eternal purpose which He purposed in Christ Jesus our Lord” (Eph 3: 9-11).

Our Lord talked with parables and symbols to reveal the Messiah, His work of salvation, in order for us to believe in Him, and rejoice in His deliverance. St. John the Baptist prepared the way by preaching and saying: “Behold; The Lamb of God who takes away the sin of the world” (John 1: 29).  And when he was jailed, he sent two of his disciples to Jesus Christ asking: “Are You the Coming One, or do we wait for another?” (Lk 7:19), to confirm the arrival of the awaited Messiah.

For thousands of years and in various ways God prepared mankind to partake in Him, as Jesus Christ dwelt among them (John 1: 14), to lift them to His heavens, and share in His Divine Nature (2 Pt 1: 4). What is our role in welcoming Him, abiding in Him, and He in us (Jn 15: 5), and rejoicing in His coming?

MAY OUR SOULS REJOICE IN HIS COMING!

The main goal of the fast is for our souls to delight in His coming to our world, and His dwelling in our hearts. For when we abide in Him, we entreat Him for ourselves, our families, all the believers and the entire world to taste the sweetness of companionship with Him who became Man to allow us all who believe in Him to become the children of God. The disciple said, “He (Jesus) made Himself of no reputation, taking the form of a servant, and coming in the likeness of men. And being found in appearance as a Man, He humbled Himself, and became obedient unto death, even the death of the Cross” (Philip 2: 7-8).

The following words of the Lord Himself to the Father were fulfilled: “And for their sakes, I sanctify Myself that they also may be sanctified by the truth… that they all may be one” (Jn 17: 19, 21).

The Divine Law commands the believer not to appear before God empty handed (Sir 35: 6; Exod 23: 15). Jesus Christ granted us the power to fulfill the commandment, for when we pray in our private dwellings, we ask on behalf of all mankind saying: “Our Father who art in heaven… forgive us our trespasses, and do not lead us into temptation” (Mt 6:9-13). As if the believer’ secret prayer lifting up all the people on his hands, and presents them asking the Father of what is for their spiritual and holy nourishment.

There is not a better offering and more delightful to the Lord than a believer’s heart that is deep enough to contain all people including those who resist him, and presents them to God lifted up by his spiritual hands.

THE HOLY FAST AND THE NATIVITY FEAST

No one can deny what the Gospels proclaimed of the transfiguration of Jesus Christ, which was witnessed by two men of the Old Testament: Moses and Elijah (Mt 17: 1-7, Mk 9:2-13; Lk 9:28-36). The two prophets shared with Jesus Christ fasting for forty days, and forty nights, and as a result, they enjoyed what no other man in the Old Testament did. For they appeared during the transfiguration, and entered into a dialogue with Christ likely around the upcoming events: His trial, passions, crucifixion, death, and burial, rising from the dead, and ascension into the heaven.

The fast in its essence is a practical proclamation of our desire for the Deliverer to transfigure within our hearts, and cleave to Him to enter into a joyous conversation about mankind’s deliverance. Those who have fasted for years, refraining from certain food, and practicing rituals without allowing God to influence their minds, hearts, feelings and emotions, may have turned the fast into a rather painful punishment. They may desire now to prepare themselves to enjoy the eternal peace, and advance their knowledge of the Divine Secrets in this fast.

The world is occupied with glittering Christmas decorations, and many compete in presenting the most magnificent decors using lights and so on in churches, public places, and homes. What pleases the Lord more is the believer who stands before Him as if in his private room, even among large congregation, lifting up in love those who are sick, sad, needy, fallen, and cast away before the King of kings, asking the Deliverer of the world to exalt them as shining stars illuminating the world among a crocked generation. (Phil 2: 7).

St. Jacob of Serugh said that the wise men carried presents of gold, frankincense and myrrh. While travelling from Babylon in the East to Jerusalem, led by the bright star, then to Bethlehem, they evangelized for Jesus Christ in the towns and villages they passed on their way to worship Him, and back when taking a different route. Many wondered about their great procession, but it had a wonderful purpose. They also preached to Herod the king, his priests, Pharisees and scribes who searched the Books for the “King of the Jews” (Mt 2: 7).

Let this Fast be an inspiration for many to welcome Jesus Christ. 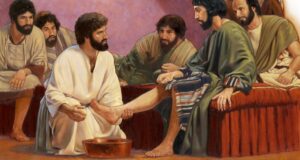 admin - September 8, 2020
0
How to overcome your Ego By: Fr Matta Elmaskeen (Fr Matthew the poor) The First CounselNever rely on your own wisdom or might or...