Home Christian Living On The Incarnation and The Eucharist
Facebook
WhatsApp

Now there are others who blaspheme, saying that Mary did not conceive Christ and that if she had conceived, then her womb would have distended and retracted.

But now some say that the bread and the cup are not the body and blood of Christ, but are merely a type. I have grown weary saying this. Woe is me! I have become disturbed on account of this ungodliness!

Who will say, ‘It is not so,’ and not despise the holy place, the altar of those who fall down and prostrate themselves to them? Thus have I known this: for it is not of concern to them, just as if they were merely eating bread and drinking wine.

Truly, those who say that it is not his body and his blood—especially those from among us, not only the pagans—are more wicked than dogs and swine. Do we say that what we partake of is bread? Is it not a mystery according to the Scriptures?

By: St Shenouda the Archimandrite

From: Against the Origenists

The Title of the Patriarch of Alexandria

Can You See God? 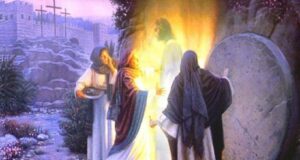