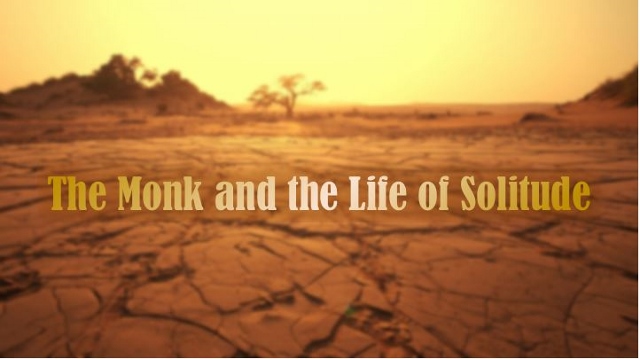 The monk doesn’t need anyone to tell him about solitude for the monk came to the monastery seeking to be isolated from the world, seeking to be a monk (monakhos) and by definition a monk is he who lives a solitary life. We are not speaking about solitude in any negative connotation but rather a positive one, it’s not about fleeing from the world as much as it’s seeking to be attached to the One. The monk is called (monakhos), because he is one attached to the One as St Paul said “he who is joined to the lord is one spirit with him.” (1 Cor 6:17)

Our primary example for solitude is the lord Jesus Christ Himself. In every occasion he used to leave the congregation and flees alone to an isolated place, not just as an act to teach us, although he wants to teach us, but he doesn’t act so as to teach us, but he isolates himself out of deep need of practicing his close relationship with the Father. He used to find joy and calmness in his Father’s bosom. “Leaving us an example, that we should follow His steps.” (1 Pet 2:21)

*After healing Simon’s mother in law: “now in the morning, having risen a long while before daylight, He went out and departed to a solitary place; and there He prayed. And Simon and those who were with him searched for Him. When they found Him, they said to him: everyone is looking for you.” (Mark 1:35-37). Christ wanted to fulfil the deepest desire of his heart which is practicing his secret relationship with the father.

* “however, the report went around concerning Him all the more; and great multitudes came together to hear, and to be healed by Him of their infirmities. So He himself often withdrew into the wilderness and prayed.” (Luke 5:15-16)

*“and it happened, as He was alone praying, that His disciples joined Him, and He asked them, saying, who do the crowds say I am?” (Luke 9:18)

*In the transfiguration scene “ now it came to pass, about eight days after these sayings, that He took Peter, John, and James and went up on the mountain to pray. As He prayed, the appearance of His face was altered, and his robe became white and glistening.” (Luke 9:28-29)

All these examples shows Jesus’ effort in leaving the people and isolating Himself in deserted places to practice His loving relationship with His Father. Monasticism stands basically on imitating Jesus during the Holy Forty Days, taking Jesus’ life as an example when He isolate himself from the people and depart by Himself to practice his relationship with the father.

The 17th epistle of St Anthony:

Our saviour Jesus Christ became to us an example for the solitary life when he climbed the mountain by himself to pray, and when He defeated Satan when he tested Him in the wilderness, that’s not because He couldn’t defeat him in front of people, but to teach us that through seclusion and quietness we can defeat our enemies and attain perfection. Also our Saviour didn’t transfigure himself to his disciples in front of the people, but when He wanted to do so he took them to the mountain and showed them His glory. Likewise John the Baptist was in the wilderness till the day he revealed himself to Israel…

Therefore learn my beloved brethren, the virtue of solitude, because through Christ’s isolation from the world, he gave us a great hope in the life of solitude. As David the prophet said: “you alone, O Lord make me dwell in safety.” (Psalms 4:9) as well as Elijah the prophet that deserved the spiritual food from the angel, it didn’t take place when he was with the congregation, or in a city or town, but in the wilderness.

All the events that took place with the saints and the examples, “were written for our admonition” (1 Cor 10:11), so we could get jealous of those who lived the solitary life that we might get closer to God; because it’s a great comfort. And those who loved seclusion with all their heart and all their senses, were honoured more than those who lived in the cities or country sides.

So work hard my beloved brethren, to abide in Him as you should so you could reach God, through the grace of our Lord Jesus Christ to whom is the glory with the Father and the Holy Spirit, from now and forever amen.]

So how do we live a solitary life while we are among people?

By: A Monk from St Macarius Monastery 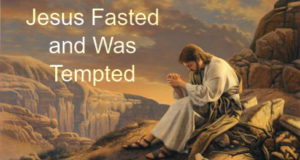 Jesus Fasted And Was Tempted