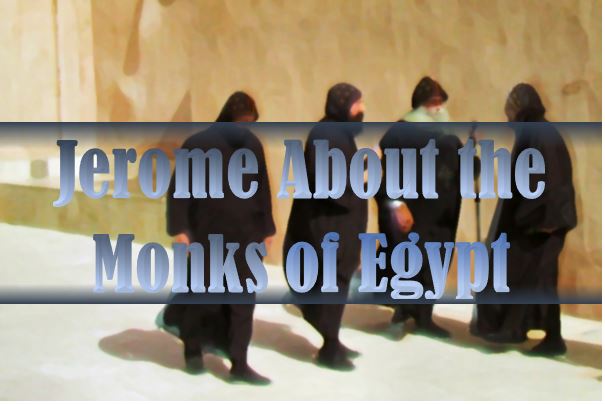 Since you like to hear about holy things, lend an ear to me for a few moments. There are in Egypt three classes of monks. First, there are the cenobites, or as we should say, men living in a community. Secondly, there are the anchorites, who live in the desert, each man by himself, and are so called because they have withdrawn from human society. Thirdly, there is the class called Remoboth, a very inferior and little regarded type, peculiar to my own province, or, at least, originating there. These live together in twos and threes, but seldom in larger numbers, and are bound by no rule; but do exactly as they choose.

Now let us come to that more numerous class who live together, and who are, as we have said, called Cenobites. Among these the first principle of union is to obey superiors and to do whatever they command. They are divided into bodies of ten and of a hundred, so that each tenth man has authority over nine others, while the hundredth has ten of these officers under him. They live apart from each other, in separate cells. According to their rule, no monk may visit another before the ninth hour; except the deans above mentioned, whose office is to comfort, with soothing words, those whose thoughts disquiet them. After the ninth hour they meet together to sing psalms and read the Scriptures according to usage. Then when the prayers have ended and all have sat down, one called the father stands up among them and begins to expound the portion of the day. While he is speaking the silence is profound; no man ventures to look at his neighbor or to clear his throat. The speaker’s praise is in the weeping of his hearers. Silent tears roll down their cheeks, but not a sob escapes from their lips. Yet when he begins to speak of Christ’s kingdom, and of future bliss, and of the glory which is to come, every one may be noticed saying to himself, with a gentle sigh and uplifted eyes: “Oh, that I had wings like a dove! For then would I fly away and be at rest.”

After this the meeting breaks up and each company of ten goes with its father to its own table. This they take in turns to serve each for a week at a time. No noise is made over the food; no one talks while eating. Bread, pulse and greens form their fare, and the only seasoning that they use is salt. Wine is given only to the old, who with the children often have a special meal prepared for them to repair the ravages of age and to save the young from premature decay. When the meal is over they all rise together, and, after singing a hymn, return to their dwellings. There each one talks till evening with his comrade thus: “Have you noticed so-and-so? What grace he has! How silent he is! How soberly he walks!” If any one is weak they comfort him; or if he is fervent in love to God, they encourage him to fresh earnestness. And because at night, besides the public prayers, each man keeps vigil in his own chamber, they go round all the cells one by one, and putting their ears to the doors, carefully ascertain what their occupants are doing. If they find a monk slothful, they do not scold him; but, dissembling what they know, they visit him more frequently, and at first exhort rather than compel him to pray more.

Each day has its allotted task, and this being given in to the dean, is by him brought to the steward. This latter, once a month, gives a scrupulous account to their common father. He also tastes the dishes when they are cooked, and, as no one is allowed to say, “I am without a tunic or a cloak or a couch of rushes,” he so arranges that no one need ask for or go without what he wants. In case a monk falls ill, he is moved to a more spacious chamber, and there so attentively nursed by the old men, that he misses neither the luxury of cities nor a mother’s kindness. Every Lord’s day they spend their whole time in prayer and reading; indeed, when they have finished their tasks, these are their usual occupations. Every day they learn by heart a portion of Scripture. They keep the same fasts all the year round, but in Lent they are allowed to live more strictly. After Whitsuntide they exchange their evening meal for a midday one; both to satisfy the tradition of the church and to avoid overloading their stomachs with a double supply of food. A similar description is given of the Essenes by Philo, Plato’s imitator; also by Josephus, the Greek Livy, in his narrative of the Jewish captivity.

Featured Article - February 8, 2016
0
“The land of Egypt is fertile, not only for growing fruits that perish, but for people who bear fruit according to God. Yes, other...