Psalms have a prominent place in our church. In ancient times, one of the Popes of Alexandria refused to ordain one of the bishops because he hadn’t memorised all the psalms by heart. It was a condition for the three ranks of priesthood (bishopric, priesthood and deacon) to recite all the psalms before their ordination. St Paul tells us in his epistle to the Corinthians, “How is it then brethren, whenever you come together each of you has a psalm, has a teaching, has a tongue, has a revelation, has an interpretation, let all things be done for edification.” (1Co 14:26) In other epistles St Paul tells us: “[Speak] to one another in psalms.” (Col 3:16) In other words, he encourages ALL Christians to memorise and speak psalms as it is better to proclaim the word of God than to proclaim the words of the world.

It is the responsibility of the monk to keep his mind connected to God at ALL times. The best way to strengthen this connection is by reciting and reading the psalms, as this leaves no space for worldly thoughts and lusts. Reading and singing psalms benefits you in two ways; you amuse yourself with the beautiful melodies of the psalm and you taste the beauty of the words of the Lord. Psalms also purify the heart as they contain a combination of praises and prayers of repentance. They are suitable for each and every occasion in our lives.

What’s in the name: The word “Psalm” is taken from the Greek word; “Psalmodia”, which means “singing.” In arabic and in Syriac, the Psalms are called “mizmar” or “mazmoor.” In Hebrew, they are called “tahleem”. “Tahleem” comes from “Halleluia” which is a unique word used in the liturgy. “Hallelu” in Hebrew means “sing” whereas “ia” means God. So, “Halleluia” means “Sing to the Lord.” In areas like Egypt and Syria, people “zaghrat” or say “Halelulululu” during weddings and ordinations, which means they are singing out of happiness. However, “Halleluia” is the liturgical version and the same meaning applies to the word “psalm.”

There are also 35 psalms not attributed to anyone, thus called “Orphan Psalms,” without father or mother, but surely they come from the liturgy and the fore fathers of the Old Testament.

What can we learn from the Psalms? The book of Psalms was actually a liturgical book because it was used in the temple during the liturgies of the Jewish. Firstly, the psalms teach us the WORD of the Lord. When a driver has lost his way, how important is the navigator in giving him directions and guiding his way? Such is the importance of the WORD of the Lord, in each one who is seeking spirituality. The navigator of our spiritual life is the WORD of the Lord as David says in his psalms: “Show me your ways O Lord. Teach me your paths.” When David was young, he was following his own ways, but after learning the ways of the Lord, he followed in these paths of majesty.

Secondly, the Psalms teach us FAITH. Although David, at times, did what he desired, he was always faithful to the Lord and depended on Him. For example, when he encountered Goliath. David’s faith gave him the courage to say: “yea Lord, though I walk through the valley of the shadow of death, I will fear no evil, for you are with me.” If you are stuck in a dark jungle with lions, serpents and spiders, no one would have the courage to walk out without fear. Yet, David says in his psalms, “I will fear no evil, for YOU ARE WITH ME”…and that is faith.

(From H.E. talk at the monastery) 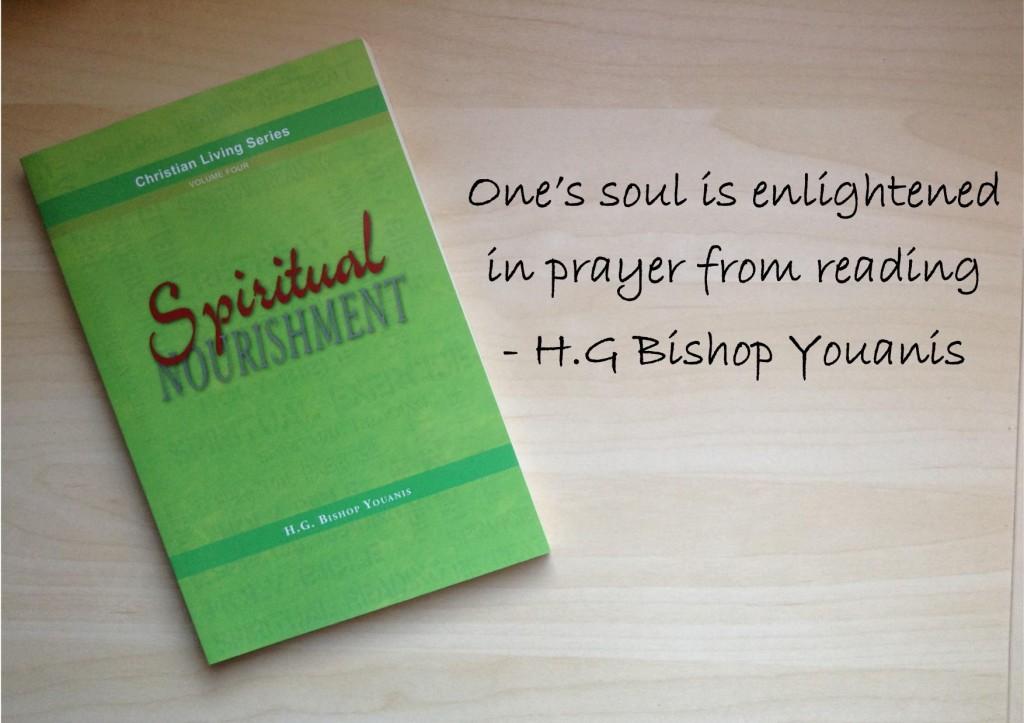 The Benefits of Spiritual Reading

H.G. Bishop Youanis - January 3, 2017
0
Reading, in general, gathers the mind from its wandering and leads it to concentrate on the subject of the reading. When the topic of...