“I suggest that, given what we know of the social tensions in Roman Egypt, the presence of an emerging culture of asceticism, and the growth of a church in which Scripture figured prominently, the impact of Scripture on early monastic acts of renunciation should not be underestimated.”
Douglas Burton-Christie

The fact that he writes this in response to a rather noticeable lack of Scriptural discussion in the field of the history of monasticism, suggest a certain trend that this field of study has traditionally taken: much effort has been poured into searching for the motivations for monastic renunciation in almost every area except Scripture, yet, all the motivations that the Desert Fathers themselves revealed to us in their writings came from Scripture. Do we have a right to pretend we know their secret motivations better than they did?

Indeed, if one examines the Apothegmata without the hindrance of too many theories on oriental influences, gnostic tendencies, political and economic fears and so forth, one finds that behind their diverse teachings lies a central, simple call to action that is best expressed in the experience of St Antony the Great in the Church: ‘If you would be perfect,’ he heard the Gospel say, as if it were spoken directly to him, ‘go, sell all you have and give to the poor, and come and follow me.’ Matt 19: 21).

It was this call, this Scriptural invitation to personal perfection through renunciation, to which the individual monks of the fifth century themselves attributed their adoption of the ascetic life. These men and women did not join the monastic ranks as an ‘experiment’ into a new kind of society, culture, or commune, but as a life-consuming and life-creating journey toward the perfection offered in the Gospel message.

Of course, this very idea requires a widespread familiarity with the Gospel and with the Scripture of the Church. Whether or not, such a familiarity was actually present in Egypt, during the first centuries of the Christian era has been the subject of considerable debate, and it is in this discussion that BurtonChristie’s work is of great importance. His investigation into the presence of books and written texts in the desert, as well as the translation of the Scripture into the various Coptic and other Egyptian dialects, is both thorough and convincing.

It is possible, though, to discover the extent of Scriptural familiarity in the Egyptian desert without the use of such detailed archaeological and anthropological evidence as Burton-Christie takes up: the very sayings of the Apothegmata, imbued as they are with a ‘Scriptural aura,’ betray the great extent to which the inhabitants of even the remotest areas of the desert knew and lived the Scripture of the Church. A short saying concerning Abba Sisoes is perhaps one of the most obvious examples: A brother asked Abba Sisoes the Theban, ‘give me a word,’ and he said, ‘What shall I say to you? I read the New Testament, and I turn to the old.’ And also from a saying concerning Antony: “Someone asked Abba Anthony, ‘What must one do in order to please God?’ The old man replied, ‘Pay attention to what I tell you: whoever you may be, always have God before your eyes; whatever you do, do it according to the testimony of the holy Scriptures.”

In these two injunctions alone, we are able to discover both the relatively ready availability of Scripture in the desert (else how would Sisoes so often read it?), and an assumed familiarity with its teachings among the general population of monks. Yet our evidence for the deep influence of Scripture on the lives of the monks is not limited to those passages which mention it directly, or quote from its pages (though such passages abound). Even those sayings which give no direct mention to Scripture per se, often betray so strong a Scriptural influence that the connection is easily seen. Abba Agathon, by way of example, is remembered as saying, ‘If someone were very specially dear to me, but I realised that he was leading me to do something less good, I should put him away from me,’ and a connection to the thought of Mark 9.43-48 seems readily apparent. Isidore the Priest said, ‘It is impossible for a man to live according to God if he loves pleasures and money,’ and again we hear the strong and unmistakable echoes of Scripture—this time of Luke 16.13, “No servant can serve two masters; for either he will hate the one and love the other, or else he will be loyal to the one and despise the other.”

And so the writings of the Desert Fathers themselves, evidence the extent to which Scripture was present and prevalent in the desert: not only was it read, but it was absorbed and infused into the lives and teachings of the monks so deeply that they could ‘speak a word’ to their disciples and have it be so inline with Scripture that it almost seemed a paraphrase. 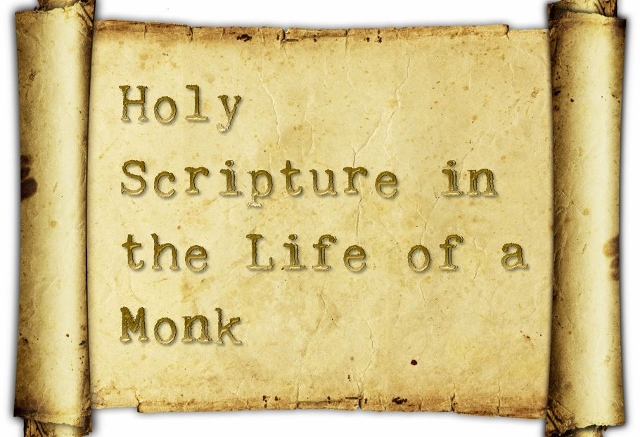 Fr Anthony St Shenouda - January 10, 2017
0
During my last retreat to the monasteries in Egypt last January and in my numerous spiritual consultations with many of the elders, the topic...