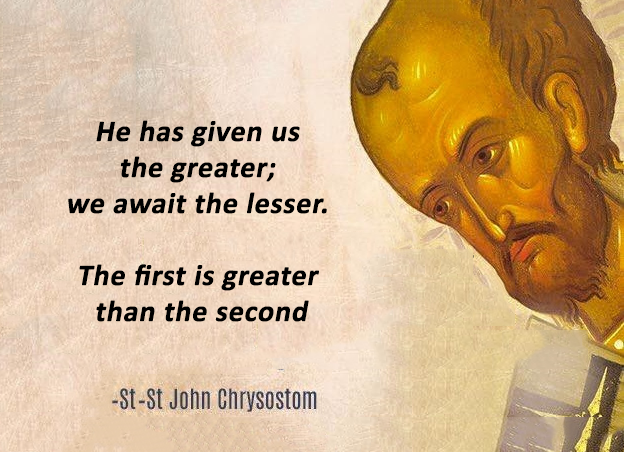 Do you realize the wondrous work of the Redemption? We were dead: by a twofold death, and we awaited a twofold resurrection. He died a single death, and rose by a single Resurrection. What do these things mean? Adam, I repeat, died in both body and soul; he died by sin, he died by nature. “For when you eat of it you will surely die.” [Gen. 2: 17]. But in that day he did not die in his nature; but he died by sin. The first death was of the soul; afterwards came that of the body.

But when you hear of the death of the soul, do not imagine that the soul dies; for the soul is immortal. The death of the soul is sin, and eternal punishment. Because of this, Christ says, “Do not be afraid of those who kill the body but cannot kill the soul. Rather, be afraid of the One who can destroy both soul and body in hell.” [Matt. 10:28]. The one who is destroyed continues to exist; but outside the sight of Him Who has destroyed him.

As I said there is a twofold death; and so twofold must be our resurrection. In Christ there was but one death. For Christ did not sin; but for us He suffered this single death. For He was not subject to death, since He was never a debtor to sin, and so neither was He liable to death. And so from a single death He rose in a single resurrection from the dead. But we who have died a twofold death rise by a twofold resurrection. Until now we have risen by one resurrection-that is from sin. For we were buried with Him in baptism and we have risen with Him through baptism. This resurrection is deliverance from our sins; the second is the resurrection of the body. He has given us the greater; we await the lesser. The first is greater than the second. For it is a greater thing to be delivered from our sins than for the body to see resurrection. Through this the body fell, because it sinned. If then this was the cause of its fall, to be freed again from sin is the cause of its rising once again.

We have risen in the greater resurrection; throwing off the greater death of sin and putting off the old garment; so we need not despair regarding the lesser one. By this resurrection we rose when we were baptized; as these here who yesterday were found worthy of baptism, the dear lambs! The day before yesterday Christ was crucified; but as night passed He rose again today. And they on the day before yesterday were still held fast by the Son; but together with Him they have risen. He died in the body, and in the body He rose again. They died through sin, and they have risen again, delivered from sin …

From : Feast of the Resurrection – St Paul Brotherhood.

Fr Anthony St Shenouda - March 25, 2016
0
The Lord of Glory sent a cherub, he led him into this mountain and when he had set his seal on Abba Macarius by...