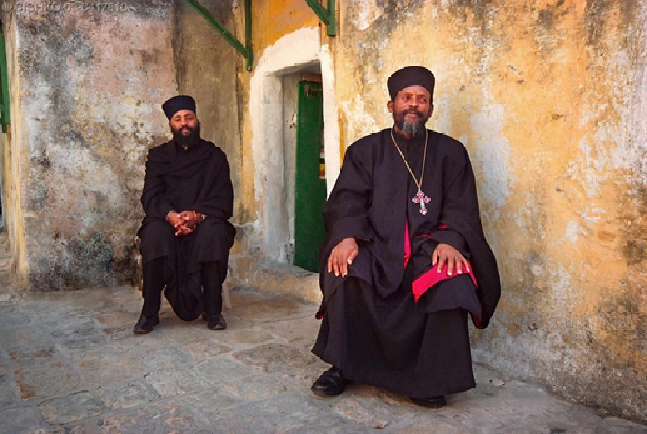 The fifth century saw an important development with the arrival of a group of monks from Egypt. They were perhaps among the refugees from the Byzantine Empire who refused to accept the Chalcedonian Christology. They established monasteries which became very important centers of learning and evangelization. It would indeed be true to say that all evangelization and all education in Christian Ethiopia was in the hands of monks until modern times. Many of these monasteries are still flourishing e.g. that of Debre Damo near the Eritrean border, still only accessible by rope.

These monks translated the Bible into Ge’ez probably using the Septuagint for the Old Testament. They also translated some extra books as well as monastic writings so that the Ethiopian canon is much more extensive than any other church.

St Aragawi received his monastic habit from Theodore, a disciple of St Pachomius. There were Ethiopian monks in the Egyptian desert from early times e.g. St Moses the Black who was head of a band of robbers until his conversion. He was changed one day when he and his group attacked a monastery, intending to rob it. Moses was met by the abbot whose peaceful countenance and warm manner overwhelmed him. He immediately felt remorse for his past sins and joined the monastery. For years he was continually tormented by his past ways and especially by lust until the prayers of his abbot St Isidore the Great miraculously healed him. Near the end of his life he became a priest and formed a monastery of 75 monks, the same number as his robber band and was martyred in 405 at the age of 75.

So there has been a continuous monastic tradition in Ethiopia from this time though there are some gaps in our historical knowledge. Further declined in the 9th century and later the Zagwe dynasty emerged which was responsible in the 12th century for the famous churches at Lalibella carved out of the solid rock and recognized as one of the architectural wonders of the world.

The great monastic revival of the 14th century led to the establishment of the monastery now known as Debre Libanos whose founders were St Tekle Haimanot and St Ewstatewos two very great influential Christian leaders through whom the monks of today trace their origins. The number of monks and nuns before 1908 has reached 12000, in 800 monasteries.

In their extremes of austerity the monks provide a prophetic and eschatological ministry in the Ethiopia Church. The bahtawi are an independent class of hermits who represent the anchoritic tradition – modern successors of St John the Baptist rebuking all including the emperor himself without fear or favour. As Shimei reviled King David, so the bahtawi have been known to hurl abuse at all and sundry including the emperor. Some live completely separately from society, unseen by all, their bones occasionally discovered after their deaths in the remotest of places. Others lived in trees (dendrites) or small holes in the ground. Often they live on leaves and bitter roots and reduce sleep to an absolute minimum. Those living in wilderness zones on the edge of the empire had the effect of expanding the empire because they invariably attracted followers. Evangelization was not systematic but the effect was to extend the frontiers of Christianity by being so successful in converting the surrounding population.

It would not be an exaggeration to say that the spirituality of the laity in Ethiopia is essentially a monastic spirituality. Some emperors even saw themselves as monk kings. ‘When Lalibella established the throne he submitted himself to a fast more severe than that of the monks because to him the kingship appeared as the monastic life’. This may have been the ideal but of course there was always a tension between this and the reality.

Why Is It, You Ask, That One Can Pray For So Many Years With...

Featured Article - March 11, 2016
0
As was pointed out at the beginning of this chapter, the suffering required for spiritual martyrdom may arise from exterior agents, or from natural...