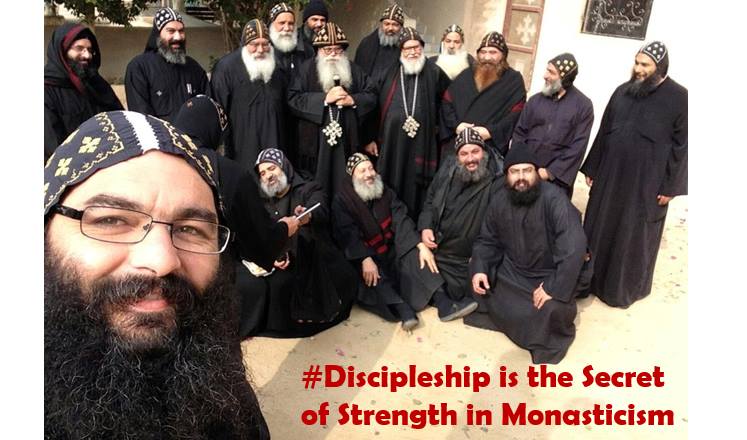 One of the fathers said: “The secret of the strength and flourishing of monasticism in the early centuries was the system discipleship followed. The sweet aroma of Lord Christ, which was in the hearts of the fathers in the wilderness attracted many who became disciples to the Lord. That was why the deserts and wilderness were filled with thousands of saintly monks.” St John Cassian says: “A novice is given to a spiritual father to become his disciple. He teaches and guides. His only concern is to lift the novice up to perfection, teaching him how to conquer his desires.” The first lesson to a novice tutored by his spiritual father was to deny his will and submit it totally to his tutor. The Lord often blessed the obedience of the youth monks to their spiritual fathers, through miracles that deepen their need to obedience and its spiritual value. These rules were applied in the wilderness of Scetis, where each group of monks were under the supervision of one of the elders, following St Paul’s words, “Obey those who rule over you, and be submissive, for they watch out for your souls, as those who must give account. Let them do so with joy and not with grief, for that would be unprofitable for you.” (Hebrews 13:17). A monk once asked an elder father for a word of benefit, so he said to him: “My son, if you want to be a farmer, how could you learn this without living for a while with a farmer, learning all about planting, irrigation, harvesting, etc. it is exactly the same, how can you learn about monasticism if you are not guided by an elder? If you keep moving from one place to the other, or just lived alone, you will spend your whole life without gaining any virtues. You should be a disciple to an elder, to get his final blessing, like Elisha who stayed with Elijah till he was lifted up to heaven, when he blessed Elisha, the latter got double of Elijah’s spirit.”

St Bemwa (Pambo) told the elders before his departure about St John the Short who accompanied him: “This is an angel, not a human being.” St John who obeyed St Bemwa his father and brought to him the hyena and many others great works. Now, look what happened to Esau when he left his father and mingled with the nations whom God rejected; Gehazi was hit by leprosy when he didn’t obey Elisha, the disciples who left Jesus destroyed their souls. Here, I have told you about the way of life and death if you enter through the narrow gate, which is obedience to your father, you will reach eternal life, if you choose the wide gate which is your own desires you will perish.

The Blessing of Discipleship:
St Gregory the Theologian says: “My brother, leave the high chairs to those who love them and come down. Be like me, I preferred to be a lad and a disciple all my life.” He said these words because of his strong belief in the blessings of being a disciple to an experienced elder. Some of these blessings are:
Continuous growth: in learning about fasting, prayer, love, mercy. Following the Bible’s words, “Remember the days of old, consider the years of many generations. Ask your father, and he will show you; your elders and they will tell you.” (Deuteronomy 32:7).
Humility: Discipleship keeps the person humble, always feeling that he is young, under the supervision of someone else. Through humbleness, a person is lifted up to perfection. This story is written in “The Paradise of Monks”: A father monk said that he saw 4 ranks lifted up to heaven:
An ill person living the life of patience and thanksgiving.
A person hosting the strangers, helping the poor and weak.
A person living in solitude struggling in the wilderness
A disciple obeying his father for the sake of God.

He saw that the disciple was the highest above all the other three, so he asked the angel, “how come that he is the highest although he is the youngest?” so he was answered: “Everyone of the other three is doing good according to his own free will, but this disciple is denying his will and obeying his teacher, and obeying for the sake of God – this is the best virtue.”

One thought and One Spirit: among the whole group. Thus there are no divisions and envies, living in one monastery in love and peace, “God sets the solitary in families; He brings out those who are bound into prosperity; but the rebellious dwell in a dry land.” (Psalm 68:6). The solitary here means those who have one thought and one heart, like the believers of the early church.

Featured Article - January 10, 2017
0
Evagrius’s ideal monk lives simply, at the edge of poverty, so to speak, accumulating only enough to support himself and to provide basic hospitality...