No one wants to be hurt, no ones desires pain, no one desires to be broken. But maybe we should! What if I told you that God loves and is very close to the broken hearted. You may argue that it definitely doesn’t feel that way or that is not the case with you. However, in Gods eyes being broken is Good. For Christ himself said “He has sent me to heal the broken hearted…” (Luke 4:18)

As human beings we tend to focus on the negative rather than the positive, on bad memories rather than the good ones. One day a Sunday school teacher got a white blank piece of paper and drew a tiny dot in the center. She asked her kids “what do you see?” They replied “a black dot”. However, nobody mentioned all the clear white space that dominated. We often focus on the negatives of others and overlook the good they have. We try and avoid bad things from happening to us and we pity ourselves when they do because sometimes that’s simply how we see the world from our eyes.

Imagine if I gave you a pair of ‘spiritual’ glasses and told you that if you wore them you could see through the eyes of God himself. Do you think you would see what you see now? I think we both know the answer to that. Just take a minute and try to imagine what you would see. How would you see others around you and how you would see the broken hearted?

A perfect example of God’s love for the broken is the story of the widow whose only son passed away (Luke 7:11-17). Just to understand the context of the time, women had their domestic roles of cooking and cleaning and looking after the children. They were not permitted to work nor were they educated. They solely depended upon their husbands to be the ‘breadwinners’ of their household. Now when their husbands pass away, then the women would rely on her son to provide for her and the others. Now if her son passes away then she has no means of survival. How will she obtain money to live? Now going back to the story as this boy’s funeral was happening there was a massive crowd around her and she was weeping and weeping. Christ saw this from a distance and it says that he had “compassion” on her. Why did the Bible not say ‘empathy’ or ‘pity’ instead? What does ‘compassion’ mean? Compassion means to see somebody in need and not only feel sorry for them but you are so moved that you actually take action and do something about it. Whereas empathy means that you feel sorry for their pain but you do not do anything. Christ had ‘compassion’ upon her and raised her son from the dead.

Why is this story so important? Well, we see how the widows ‘brokenness’ caught God’s eyes and that she immediately had God’s full attention. God drew near to her straight away and without hesitation healed her broken heart. How about us? When we are broken do we realise that God has his eyes focused on us and is willing to heal us only if we let him.

Another example is the women with the flow of blood for 12 years (Luke 8:43). This woman had spent all her money on doctors and not one of them could help her condition. So now she is poor, has no money left and is alone. You can imagine that she probably hasn’t showered in days or even weeks. She’s probably wearing an old and dirty garment. Now can you imagine the ‘stench’ or odor that she would have had. People would stay clear from her because they couldn’t stand her odor. Also, in those times people who were ill were classed as ‘outcasts’ as they were seen to be ‘not pure’. People believed that they had their problems as a punishment for their sins. You can only imagine how this lady has been isolated for twelve years and is used to being alone. Now she sees Christ from a distance and he is crowded with a large multitude around him. She says to herself “if I could just touch the hem of his garment, I know I’ll be made well”. Her faith was so strong and powerful. For someone who has been isolated from society for a long time you can picture that she would have been scared to approach people again but this did not stop her. She made her way through the crowd of people where she finally bent down and touched the hem of Christ’s garment and she was healed immediately. Now Christ felt his power release and asked ‘who touched me?’ His disciples did not understand what he meant as they were perplexed by the odd question as the multitude were all around him everyone had touched Christ. One can imagine the crowd stopping and looking and she would have been terrified not knowing what Christ would do when he found out it was her. So she came forward trembling saying it is her! And Christ said that her faith has made her well! It is known that “Jesus came to set free the downtrodden” (Luke 4:18-21).

Why is broken beautiful in Gods eyes? Because when you’re broken you know that your NOTHING and then you turn to God who is EVERYTHING! You kneel before him in weakness and with complete humility. It is only at this point when God can touch you and heal the brokenness within you. God collects every piece and transforms it into something spectacular. God’s strength is made perfect in weakness.

LOOK AROUND YOU…AND YOU WILL SEE THE BROKENNESS OF THIS WORLD!

Just remember, “If you are never broken then you will never experience Gods comfort” 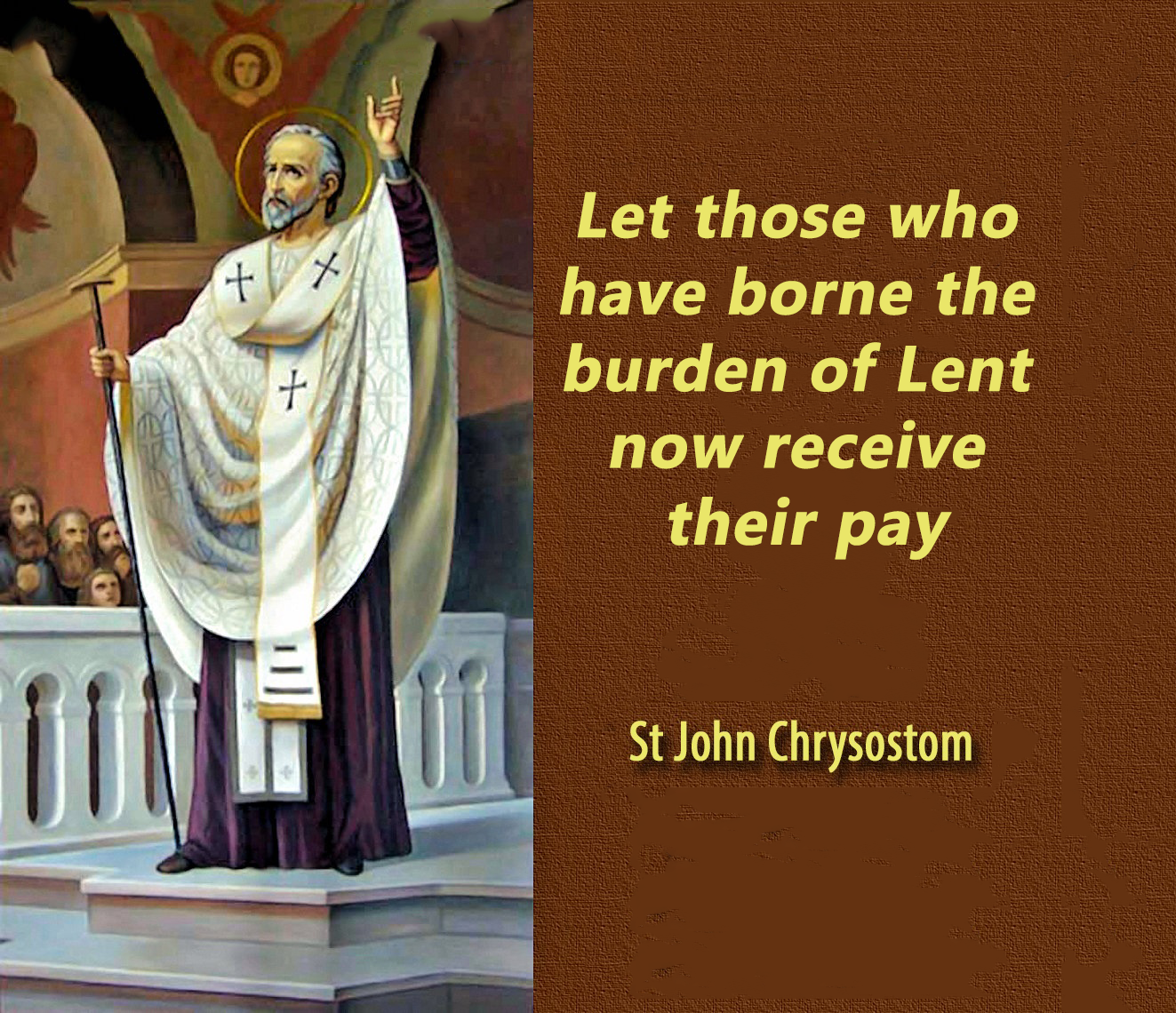 St. John Chrysostom - April 16, 2018
0
Let all Pious men and all lovers of God rejoice in the splendor of this feast; let the wise servants blissfully enter into the...