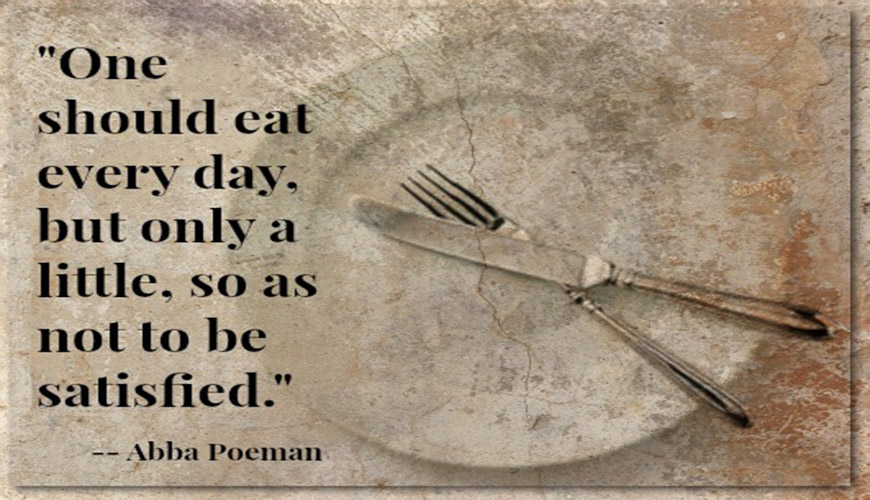 Many of the Desert Fathers experimented with harsh ascetic regimens, severely limiting their sleep and their intake of food and drink. For example, Abba Arsenius claimed that “it is enough for a monk, if he is a real fighter, to sleep only one hour”; Abba Dioscorus boasted that he never ate cooked food or fruit or vegetables; and poor Abba Isaiah found himself publicly chided for daring to mix the daily ration of bread and salt with water. Poemen, by contrast, was critical of extremes: “Many of our Fathers have become very courageous in asceticism, but in fineness of perception there are very few.”

Once a monk approached St Poemen to ask him about fasting, for he had heard about those who ate only every other day. Poemen admitted that in his younger days he had met those who practiced even more severe regimens eating only every three, four, even seven days. But he advised against it: “The Fathers tried all this out as they were able and they found it preferable to eat every day, but just a small amount. They have left us this royal way, which is light.” On another occasion, one of Poemen’s disciples teased him about washing his feet: “How is it that others practice austerity and treat their bodies harshly?” Poemen’s reply was poignant: “We have not been taught to kill our bodies, but to kill our passions.” Poemen did not deny the rigors of desert life: “Poverty, hardship, austerity and fasting: these are the instruments of the solitary life.” He stressed that one did have to control one’s appetites. Just as King David had seized a lion by the throat and killed it, so the monk had to seize himself by the belly to destroy the invisible lion (presumably, the devil).

Once, when a monk admitted to eating lots of vegetables, Poemen told him to eat bread instead, with a few vegetables. Poemen also insisted that wine was not part of a monk’s diet and argued that one can hardly acquire “fear of God when our belly is full of cheese and preserved foods.” As Poemen saw it, too much effort spent on meeting physical needs distorted one’s spirituality: “Because of our need to eat and sleep, we do not see the simple things.” What was needed was discernment and a balance of exterior and interior disciplines: “To sit in the cell is, externally, to work with the hands, eat once a day, keep silence and meditate; and internally, to make progress by… keeping the hours of prayer and keeping a watch on the secret thoughts of the heart.” Among the sayings attributed to Poemen, twenty deal with such ascetic matters. It is not easy to situate Poemen’s ascetic views vis-a-vis others in the Apophthegmata. Burton-Christie claims that Poemen’s moderate asceticism is expressive of the Apophthegmata’s basic approach; but it is clear that the ancient editors also preserved voices that taught harsher views.

One of the Youth - March 9, 2016
0
Our beloved Mother St. Mary holds a very significant role in orthodoxy, and in no other period of the year do we venerate her...