There was a certain man whose name was Moses, was by race an Ethiopian, and his skin was black. He was the slave of a man in high authority. Because of his evil deeds and thefts his master drove him out of his house. It is said that he even went so far as to commit murder. I am compelled to mention his wickedness in order that I may show forth the beauty of his repentance. People say concerning him that he was even the captain of a band of seventy thieves. The following thing used to be related about him, and he is said to have committed it during the period in which he passed his time in stealing.

He had as an enemy a certain shepherd, against whom he remembered certain evil things. He went to steal sheep from his flock. The shepherd was told by a certain man who said, Moses has crossed the Nile by swimming, and he holds a sword in his hand, and his clothes are placed on his head; and he has crossed the river by swimming. The shepherd covered himself over with sand, and hid from him. When Moses had come and did not find the shepherd, he chose out two fine rams from among the sheep and slew them. He tied them together with a rope, and swam across the river again with them. Having come to a small village he skinned the rams and ate the best portions of them. He sold the remainder for wine, and drank. After these things he went back to his companions. One day, while he was associated with them in doing hateful things, his senses came back to him in the morning season. He repented of his evil acts, and rose up and fled to a monastery. From that time he drew near to works of repentance so closely that the devil who had made him sin from his youth up, and who would have continued to make him sin, would stand before him in visible form and would look upon him. Thus he came to the knowledge of our Lord Christ.

About him, Moses the Ethiopian, they tell the story that thieves once came and went into his cell, because they did not know who he was. He tied them all together with cords and lifted them up on his shoulders like a bag of chopped straw. He brought them to the church to the brethren, and said to them, “Since I do not have the power to do evil to any man, what do you command me to do to those who rose up against me to slay me?” At that time Moses had been fasting for seven days, and had eaten nothing. After he had done this he informed the thieves, saying, “I indeed am Moses who was formerly the captain of a band of thieves.” Having heard this they praised and glorified God. When they saw the sincerity of his repentance they also removed themselves from their evil deeds, and said within themselves, “Let us also draw near to repentance, so that we may become worthy of the forgiveness of sins, even as he also is worthy.”

Whilst fasting often, and during the time of prayer and silent contemplation, that devil of error, who brings back to the remembrance of the mind the wickedness of former habits, would come to him, and tempts him to such a degree that, even as he himself has told us, it wanted exceedingly little to make him fall from his covenant. Having come to the old man Isidore the great, who had arrived from Scete, Moses told him concerning the war of his body. The old man said to him, “Do not be distressed, for these are the beginning of the birth pangs, and they come upon you seeking what they are accustomed to receive, even as a dog which comes continually to the cook. If a man gives him nothing he will not go there again. Thus also it is with you, for if you will continue in fasting, in prayer, and in silent contemplation, the devil will straightaway fall into despair and will flee from you.”

From that time he was exceedingly constant in his work of spiritual excellence. He ate nothing whatsoever, except ten ounces of dry bread daily when he was doing work. He would recite from beginning to end fifty prayers during the day. The more he dried up his body, the more he was vexed and consumed by dreams. Again he went to one of the old men, and said to him, “What shall I do? For thoughts of lust which arise from my former habits attack me.” The old man said to him, “ These lead you into error because you have not turned away your heart from the similitudes of them, but give your heart to watching and careful prayer, and you will be free from them.” When he had heard this direction he went to his cell, and made a covenant with God that he would neither sleep during the whole night nor bend his knees. He dwelt in his cell for seven years, and remained standing the whole of each night with his eyes open, and never closed his eyelids. After this, he set himself other ascetic labors, for he would go out during the nights and visit the cells of the old men, to take their waterskins and fill them with water, because they lived a long way from the water, about two miles, some say four miles, and others say five miles. One night he went to fill the water skins with water, according to his wish. As soon as he had bent down over the spring, a devil struck him a blow across his loins as with a stick, and departed leaving him half dead. Moses understood who had done this thing to him. On the following day one of the brethren came to fill the water skins with water, and he saw the blessed man lying there. He drew near to him, asking, “What has happened to you?” When Moses had told him the story, the brother went and informed Abba Isidore, the priest of the church of Scete. Abba Isidore sent brethren immediately, took him up and brought him to the church. He was ill for a long time, and never thoroughly recovered from his illness. He never again enjoyed the health of body he had possessed formerly.

Abba Isidore said to him, “Rest yourself, O Moses, do not fret yourself against the devils, and do not seek to make attacks upon them. There is moderation in everything, even in the works of ascetic life.” Moses said to him, “I believe in God, in Whom I placed my hope, that being armed against the devils I must not cease to wage war with them until they depart from me.” Abba Isidore said to him, “In the Name of Jesus Christ, from this time forward the devils shall cease from you. Draw near then, and participate in the Holy Sacraments. You shall be free from all impurity both of the flesh and of the spirit, for you must not boast within yourself, and say, ‘I have overcome the devils, for it was for your benefit that they have waxed strong against you.’ Moses went back again to his cell. After two months, Abba Isidore came to him, and asked him concerning himself. Moses said to him, “I never see now anything which is hateful to me.” He was also held to be worthy of the gift of Divine Grace, and he could chase away the devils from many folk who were vexed therewith, and as flies take to flight before us so did the devils depart from before him. Such were the ascetic labors of the blessed man Moses, who was himself vexed with great matters. He also became a priest, and left behind him seventy disciples who were men of worth. When he was a thief he had as followers seventy men who were thieves, and these became his disciples, and were perfect in the fear of God.

From: The Paradise of Palladius

How Servants Can Respond To The Behaviour Of Sunday School Children 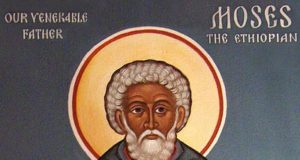 Abba Moses to Abba Poemen – Seven Instructions to Live in...

admin - September 19, 2019
0
Seven instructions which Abba Moses sent to Abba Poemen. He who puts them into practice will escape all punishment and will live in peace,...